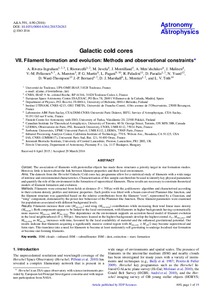 Context. The association of filaments with protostellar objects has made these structures a priority target in star formation studies. However, little is known about the link between filament properties and their local environment. Aims. The datasets from the Herschel Galactic Cold cores key programme allow for a statistical study of filaments with a wide range of intrinsic and environmental characteristics. Characterisation of this sample can therefore be used to identify key physical parameters and quantify the role of the environment in the formation of supercritical filaments. These results are necessary to constrain theoretical models of filament formation and evolution.Methods. Filaments were extracted from fields at distance D < 500 pc with the getfilaments algorithm and characterised according to their column density profiles and intrinsic properties. Each profile was fitted with a beam-convolved Plummer-like function, and the filament structure was quantified based on the relative contributions from the filament "core", represented by a Gaussian, and "wing" component, dominated by the power-law behaviour of the Plummer-like function. These filament parameters were examined for populations associated with different background levels.Results. Filaments increase their core (M-line,M-core) and wing (M-line,M-wing) contributions while increasing their total linear mass density (M-line,M-tot). Both components appear to be linked to the local environment, with filaments in higher backgrounds having systematically more massive M-line,M-core and M-line,M-wing. This dependence on the environment supports an accretion-based model of filament evolution in the local neighbourhood (D <= 500 pc). Structures located in the highest backgrounds develop the highest central A(V), M-line,M-core, and M-line,M-wing as M-line,M-tot increases with time, favoured by the local availability of material and the enhanced gravitational potential. Our results indicate that filaments acquiring a significantly massive central region with M-line,M-core greater than or similar to M-crit/2 may become supercritical and form stars. This translates into a need for filaments to become at least moderately self-gravitating to undergo localised star formation or become star-forming filaments.