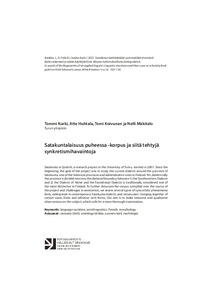 Satakunta in Speech, a research project at the University of Turku, started in 2007. Since the beginning, the goal of the project was to study the current dialects around the province of Satakunta, one of the historical provinces and administrative units in Finland. Yet, dialectically the province is divided into two; the dialectal boundary between 1) the Southwestern Dialects and 2) the Dialects of Häme and the Transitional Dialects is traditionally considered one of the most distinctive in Finland. To further showcase the corpus compiled over the course of the project and challenges in annotation, we assess several types of syncretistic phenomena fairly widespread in contemporary Satakunta dialects and vernaculars: merging together of certain cases, finite and infinitive verb forms. Our aim is to make tentative and qualitative observations on the subject, which calls for a more thorough examination.