Transgender people and the role of voice in social situations

Transgender people and the role of voice in social situations 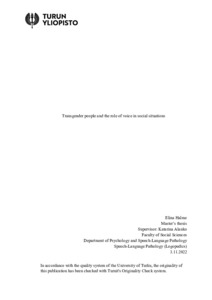 Transgender is used to describe the spectrum of individuals whose gender identity does not conform with the sex assigned to them at birth. Transgender people may experience gender dysphoria. Gender dysphoria refers to the feelings of distress when there is a conflict between a person’s gender identity and with the sex assigned at birth. Social dysphoria is a part of gender dysphoria that is often associated with social situations. Voice therapy is a one way to alleviate social dysphoria. Voice and transgender people are still a new area in voice therapy, but it is an ongoing topic due to social changes and a growing amount of speech therapy clients.

The aim of the present study was to find answers to the following research questions: 1) in which social situations do transgender people feel that the importance of their voice is emphasized, 2) what is the role of voice in social dysphoria, and 3) how the hormonal treatment, voice therapy and voice training has affected on satisfaction related to voice and its use.

This Master’s thesis was based on an online survey. A total of 92 respondents answered the online questionnaire. The main results were: Meeting of new people was mentioned most often as the situation where the importance of voice was highlighted. Meeting of new people was also reported as a situation that is causing stress and when controlling voice is difficult. In addition, results revealed that voice is affecting on respondents’ daily life on many different levels. Respondents reported that they have been misgendered because of their voice and therefore they avoid speaking in various social situations. Interestingly, only a few respondents had received speech therapy and only some of them were satisfied with the outcomes. The results of the survey revealed that what is happening in social situations and what kind of feelings and emotions they are causing may be more significant than specific situations or locations. It seems obvious that experiences of social dysphoria are often related to external factors such as experiences with misgendering.