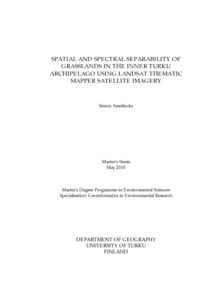 The present study investigates the spatial and spectral discrimination potential for grassland patches in the inner Turku Archipelago using Landsat Thematic Mapper satellite imagery. The spatial discrimination potential was computed through overlay analysis using official grassland parcel data and a hypothetical 30 m resolution satellite image capturing the site. It found that Landsat TM imagery’s ability to retrieve pure or near-pure pixels (90% purity or more) from grassland patches smaller than 1 hectare was limited to 13% success, compared to 52% success when upscaling the resolution to 10 x 10 m pixel size. Additionally, the perimeter/area patch metric is proposed as a predictor for the suitability of the spatial resolution of input imagery. Regression analysis showed that there is a strong negative correlation between a patch’s perimeter/area ratio and its pure pixel potential.