Unca Don and Unca Scrooge’s Guide to History. Representations of the Past in the Disney Comics of Don Rosa

Unca Don and Unca Scrooge’s Guide to History. Representations of the Past in the Disney Comics of Don Rosa 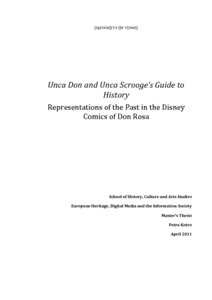 This thesis studies the various forms and layers of representations of the past that can be found in the Disney comics of Don Rosa. To stay true to the legacy of renowned comic book artist Carl Barks, Rosa has stopped time in the duck universe to the 1950’s: the decade when Barks created his most noted stories. There is a special feel of historicalness in Rosa’s duck stories, as his characters recall events that occurred in both Rosa’s own stories as well as Barks’. Rosa has shed new light to the past of the characters by writing and illustrating the history of Scrooge McDuck, one of the most beloved Disney characters. Rosa is also adamant that the historical facts used in his stories are always correct and based on thorough research.

The methodological tools used in the analysis of the comics come from the fields of comic book studies, film theory, and history culture. Film and comics are recognized by many scholars as very similar media, which share elements that make them comparable in many ways. This thesis utilizes studies on historical film, narrative and genre, which provide valuable insight and comparisons for analysis.

The thesis consists of three main chapters, the first of which deconstructs the duck universe in the stories in order to understand how the historicalness in them is created,and which outside elements might affect them, including the genre of Disney comics, publishers, and the legacy of Barks. The next chapter focuses on The Life and Times of Scrooge McDuck series, i.e. the stories which are located in the past. Such stories feature similar representations of history as for example Westerns. They also compress and alter history to meet the restrictions of the medium of comics. The last part focuses on the adventure stories which draw inspiration from for example mythology, and take the characters to strange and mystical, but yet historical worlds. Such treasure-hunting stories show similarity to the action-adventure genre in film and for example their stereotypical representations of foreign cultures. Finally, the chapter addresses the problematic of historical fiction and its capability to write history.