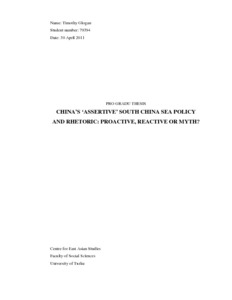 In March 2010, Chinese State Councillor, Dai Bingguo, in a private meeting with US Deputy Secretary of State, James Steinberg, allegedly referred to the South China Sea (SCS) as one of the country’s ‘core interests’, a term normally only used to refer to regions like Taiwan, Tibet and Xinjiang upon whose sovereignty Beijing will make no compromises. This alleged wording by Mr Dai caused a strong global reaction, with many countries around the world expressing a fear that China, on the back of its rise to the status of the world's second largest economic power, was now about to implement a more assertive foreign policy more in keeping with its new status of global superpower.

As the use of the term ‘core interest’ took place in a private meeting and appears to have been subsequently leaked, it is impossible to prove what was said or meant, yet in 2011, with China and the US continuing to eye each other with suspicion, the adverse repercussions of people trying to deduce what was meant are undeniable. By analysing the views of experts and the evolution or otherwise of Chinese rhetoric and policy towards the SCS, this thesis will show how the alleged use of a term in a private meeting can have consequences that far exceed what was originally intended. It will also show that it is highly unlikely that China’s maritime policy is becoming more assertive as, at China's present stage of social and economic development, it simply cannot afford the ill will and adverse consequences that would result from an act of international aggression. It will show how easy it seems to be for a country like the US to project a misleading image of another country’s intentions, which can in turn serve partially to mask its own intentions. Finally, it will show that the China’s stance on the SCS is starting to be seen by the world as a litmus test for the assertiveness of overall Chinese foreign policy.