The Dark Side of International Business? Stakeholder Approach to Human Trafficking in Finnish Construction and Service Sectors

The Dark Side of International Business? Stakeholder Approach to Human Trafficking in Finnish Construction and Service Sectors 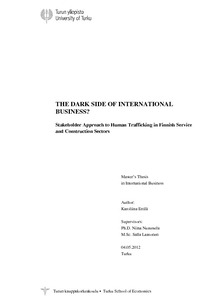 Human trafficking is not a new phenomenon. It has existed in various forms for ages around the world. Some researchers have even compared it to slavery, calling it the modern form of slavery in the 21st century. This study is particularly interested in the role of work-related human trafficking in Finnish business. In order for something to be called work-related human trafficking, the concepts of forced labour and human trafficking have to overlap. From the economic point of view, human trafficking is governed by the laws of supply and demand. In many countries the global pressure on cutting costs has created two trends: the increased supply of migrant workers and the deregulation of labour markets. These competitive pressures can have an adverse impact on the conditions of employment and, in the worst cases, can lead to forced labour and trafficking. In fact, trafficking has become one of the most profitable illicit industries worldwide, generating tremendous profits due to its low costs and huge profits. Therefore, it is important to investigate the phenomenon from the business point of view.

This study is a qualitative research conducted by using theme interviews as a research approach. Altogether 13 interviews have been conducted and some secondary data has been used in order to find out what the role of human trafficking is in Finnish business. The special sectors investigated are the Finnish construction and service sectors. The theory framework used in this study follows the stakeholder approach. The relevant stakeholder groups for this study are: ‘institutions and authorities’, ‘law enforcement’, ‘management’ and ‘employees – potential victims’ of trafficking. With the help of these stakeholder groups, a holistic picture of the phenomenon is formed.

It can be concluded that the role of human trafficking is complicated but it does exist in Finnish business. It appears in low-cost business sectors where the demand for cheap labour is high. Thus, often the victims are foreigners who do not know the culture or the Finnish conditions of employment. Especially smaller Finnish companies are at risk of getting involved in human trafficking or related exploitation cases since monitoring is much more scarce in these firms than in larger companies. The risk of human trafficking and exploitation is also higher at the bottom of the complicated subcontracting chains or when using foreign recruitment agencies. Thus, the study believes that active and intensive collaboration between the company’s different stakeholder groups is needed in order to prevent work-related human trafficking from flourishing in Finland.