Music digitalization and its effects on the Finnish music industry stakeholders

Music digitalization and its effects on the Finnish music industry stakeholders 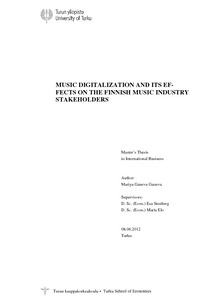 For the past two decades the music digitalization has been considered the most significant phenomenon in the music industry as the physical sales have been decreasing rapidly. The advancement of the digital technology and the internet have facilitated the digitalization in the music industry and affected all stages of the music value chain, namely music creation, distribution and consumption. The newly created consumer culture has led to the establishment of novel business models such as music subscriptions and à-la-carte downloads websites and live streaming. The dynamic digital environment has presented the music industry stakeholders with the challenge to adapt to the requirements of the constantly changing modern consumers’ needs and demands.

The results suggest that the music industry is currently in a turbulent stage of experimentation with new business models and digital innovations. However, at this point it is impossible to determine which business model will be approved by the consumers in the longer run. Nevertheless, the study confirmed the claim that consumption of music in its digital form is to become dominant over the traditional physical copies sales in the nearest future. As a result the music industry is becoming more user-oriented; that is the focus is shifting from music production towards artist branding and management and visibility to the audience. Furthermore, the music industry is undergoing the process of integration with other industries such as media, social networks, internet services providers and mobile phone manufacturers in order to better fulfill the consumers’ needs. The previously underrated live music and merchandising are also increasing their significance for the revenues in the stagnant music markets. Therefore, the music industry is developing at present towards becoming an integrated entertainment industry deeply penetrating every point of modern people’s leisure activities.