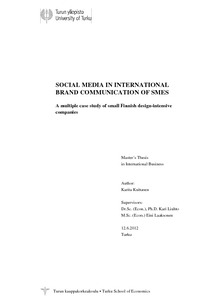 The research was carried out as a mixed methods research employing the questionnaire and multiple case study methods. The questionnaire was used to gather preliminary information on Finnish design-intensive companies and to provide an eligible list of companies for deeper examination. Then, four case companies were studied in more depth. The empirical evidence of the case companies was mainly gathered through theme interviews.

The results of the questionnaire shed light on the internationalisation of small Finnish designintensive companies. On average, the companies had internationalised rather quickly after they had been founded. However, the share of exports was rather low in most of the companies. The results revealed also that social media was already used widely in the exporting companies and the use can be expected to grow in future.

The findings of the multiple case study suggest that branding activities in small Finnish designintensive companies are constrained by limited resources and skills. In addition, the branding activities are strongly guided by the vision and values of the entrepreneur(s) rather than extensive marketing research. The brand structure was simple in all case companies and they aimed at having a standardised brand image across markets. However, all case companies had faced a need for some adaptation of their international brand communication. Internationally important brand communication channels were international fairs, the internet, word-of-mouth and social media.