Side peaks in Nb and NbTi point-contact spectra 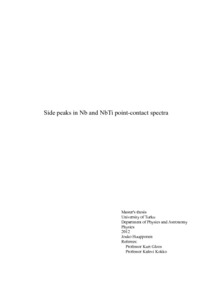 Superconductor – normal metal point contacts were investigated, using different combinations of Cu, brass, Nb and NbTi. The resulting spectra contained side peaks. The currents at which these side peaks appeared, depended on the radii of the contacts. For contacts with Nb this dependence was quadratic, while for contacts with NbTi it was linear. Based on this, we argue that the side peaks in the case of the Nb contacts are due to the critical current density being exceeded. In contrast, side peaks of the NbTi contacts are caused by the self-magnetic field exceeding the lower critical field of NbTi. The NbTi contacts did not show the expected contribution from the vanishing Maxwell resistance of the superconductor, a question which remained open.