The Rebirth of Dinamo Riga: From the Glorious Soviet Past to the Kontinental Hockey League 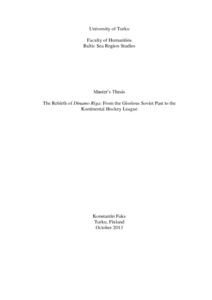 Since the end of Cold War rivalries, the world of international hockey was deemed to becoming increasingly homogenized along western sportization patterns. The introduction of the Russian-sponsored Kontinental Hockey League (KHL) signified a new era in the global diffusion of modern sports. Its recent expansion in the post-Soviet space and European countries significantly reshuffled the landscape of international hockey, offering new prospects for the studies of the intersection of sports, history, geopolitics and nationalism in the age of globalization.

The aim of this study is to conceptualize the KHL and illuminate the role of ice hockey in post-Soviet Latvia. I treat the creation of the KHL and the integration of a Latvian-based team, “Dinamo Riga,” into the KHL within the broader discussion on the globalization of sports and its effects on national communities. The research is based on a case study of the modern rebirth of “Dinamo Riga” and its participation in the KHL and is confined to the scholarly themes in sports research, such as the history of modern sports and globalization, sports and nationalism. The study pays special attention to unveiling the geopolitical links between the restart of Latvian-Russian relations after the EU’s eastern enlargement and the re-emerging Latvian-Russian contacts in ice hockey.

The research concludes that with the creation of the KHL, European hockey received a new charismatic “zone of prestige” for sports interaction. The project of “Dinamo Riga” became the new global phenomenon in Latvian sports in terms of its capabilities to transcend the post-Soviet geopolitical stereotypes in relation to Russia and serve as a new national symbol in the promotion and celebration of Latvian sporting nationalism. Further sociological research would require the clarification of the impact of Latvian-Russian cooperation in hockey on the bilateral relations of both countries and the formation of a national community in Latvia.