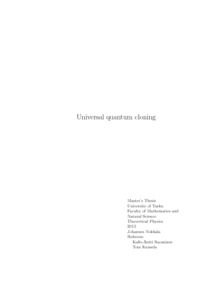 After introducing the no-cloning theorem and the most common forms of approximate quantum cloning, universal quantum cloning is considered in detail. The connections it has with universal NOT-gate, quantum cryptography and state estimation are presented and briefly discussed. The state estimation connection is used to show that the amount of extractable classical information and total Bloch vector length are conserved in universal quantum cloning. The 1  2 qubit cloner is also shown to obey a complementarity relation between local and nonlocal information. These are interpreted to be a consequence of the conservation of total information in cloning. Finally, the performance of the 1  M cloning network discovered by Bužek, Hillery and Knight is studied in the presence of decoherence using the Barenco et al. approach where random phase fluctuations are attached to 2-qubit gates. The expression for average fidelity is calculated for three cases and it is found to depend on the optimal fidelity and the average of the phase fluctuations in a specific way. It is conjectured to be the form of the average fidelity in the general case. While the cloning network is found to be rather robust, it is nevertheless argued that the scalability of the quantum network implementation is poor by studying the effect of decoherence during the preparation of the initial state of the cloning machine in the 1 ! 2 case and observing that the loss in average fidelity can be large. This affirms the result by Maruyama and Knight, who reached the same conclusion in a slightly different manner.