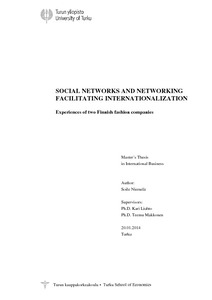 Background: Fashion is a dynamic and creative industry where larger retailers are enjoying international success. Small businesses however are struggling in the face of international expansion, as they lack the necessary resources and managerial know-how. The Finnish fashion industry has neither been able to develop the industry environment to support small and micro firms nor has Finland relevant finance or public domains, such as, seen in other Nordic countries. Networking has been recognized to facilitate organizational growth and international expansion in industries such as manufacturing and high technology. It has enabled smaller companies to gain resources, knowledge and experiences otherwise unattainable.

Objective: The purpose of this study was to explore how networking has been utilized in the Finnish fashion industry. Particularly social relationships and networks are examined, as they emphasize the importance of individuals. Exploration on the past actions should also provide insight how networks and networking could be utilized and developed in the future.

Main findings: It was discovered that the Finnish fashion industry (social) network is rather dense. This was mainly due to the small size of the Finnish market. In the early years of the establishment of the company, close contacts seemed to be utilized. As a company expands and extends its business, the relationships tended to move towards more utilitarian in nature. However, in some cases, the long term relationships had also affectionate features, such as trust and commitment.

International networking was found to have positive impact on business opportunities. Participation to events, such as trade shows, was perceived as one of the best ways to meet new international contacts and to develop ones network. Active networking in the Finnish market, however, created both domestic and international opportunities. Furthermore, cooperation and open communication were discovered to facilitate innovation and projects.