The many faces of strikes : attitudes towards industrial action by labour, management and human resources

The many faces of strikes : attitudes towards industrial action by labour, management and human resources 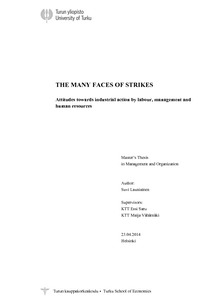 Strikes provide a current, fresh but also a seldom-addressed issue to study from economic sciences perspective. This study provides to filling this research gap by trying to identify attitudes towards strikes that can be found inside organizations. The research problem this study then sets out to answer is: “What kinds of attitudes exist inside organizations towards industrial actions and how attitudes vary between labour, management and human resources?” This study has been planned with a view to test how qualitative attitudinal research, as a method, is suited to studying a phenomenon such as strike. At the heart of this research approach lies an assumption linked to rhetoric social psychology, that attitude is a phenomenon that can be identified in argumentation.

For this research 10 semi-structured interviews in 4 organizations were conducted utilizing statements and pictures as stimulants for discussion. The material was transcribed and analysed following the two levels, categorical and interpretive, demanded by the chosen method.

Altogether five attitudes were discovered; three of them negative, one indifferent and one positive by nature. The negative attitudes of unfairness, failure and personification towards strikes represented the side of strikes that was perhaps the most anticipated, portraying the contradictions between employees and employer. The attitude of ordinariness, which portrayed indifference, and the positive attitude of change however, were more unanticipated findings. They reflect shared understanding and trust between conflict parties.

The utilization of qualitative attitudinal approach to study strikes was deemed successful. The results of this study support prior literature on workplace conflicts for example in regards of the definition of conflict and typologies conflicts. In addition the multifaceted nature of strikes can be perceived as one statement supported by this study. It arises in the nature of the attitudes, the diversity of discussion themes during the interviews as well as in the extent of possible theories to apply.