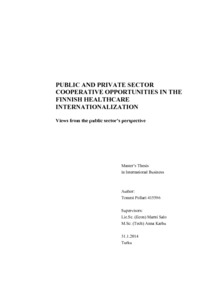 Traditionally mostly publicly provided Finnish healthcare services are confronted today by the evident challenge of rising healthcare costs as the expenditure on health and social case has exceeded Finland’s national GDP growth significantly since the new millennium. While the opening of the traditional barriers through the EU’s new patient directive resulting in increasing international competition and the free flow of patients within the EU present opportunities for the Finnish healthcare services industry there are also several challenges for the existing healthcare system as proposed by the Ministry of Employment and the Economy in 2011. Due to the structure and nature of the current Finnish healthcare service system the greatest potential for
internationalization is seen from a joint cooperation of the public and private sectors in an internationalization network for Finnish healthcare services. As its formation has recently also taken as a strategic initiative to be completed by the Ministry of Employment and the Economy and no earlier research exists on how this is seen in practice by the network actors, the purpose of this study is to examine the proposed solution of forming an internationalization network between the public and private sector actors in Finland in practice from the viewpoint of public sector actors.

The research relied heavily on the reports by the Finnish Ministries in understanding the current situation of the Finnish healthcare services internationalization and its potential. Suitable theories were also used to build a more comprehensive view of the matter. The study applied a qualitative research approach on the explorative research problem. The data collection was achieved through expert interviews in two of the largest Finnish public healthcare service providers; the Turku and Helsinki Central University Hospitals. Expert interviews were considered as the most suitable method for data collection in order to create an in-depth understanding of the topic within the limitations of this thesis. In turn, two different public healthcare service providers were chosen to give a broader view of the field instead of focusing on a specific unit and also to allow a possible comparison between the two different organizations. The latter however was shown not to be suitable for the purposes of this study as the opinions of the respondents varied largely also within their own organizations.

The conclusion is that while the actors agree on the evident internationalization of Finnish healthcare services, there are several large-scale structural challenges effectively preventing such activities while at the same time the opportunities within Finland vary, as there are several niches but no real large-scale advantages in the highly competitive industry. Interest towards cooperation between the sectors are seen especially in exploiting the advantages offered by the private sector in commercialization and marketization, yet however no clear
views exist on how these activities should be governed or structured in the short-term as a larger reform of the entire Finnish healthcare service sector is needed in the long-term.