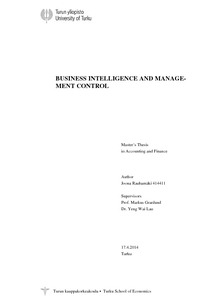 The purpose of this study is to explore the possibilities of utilizing business intelligence (BI)systems in management control (MC). The topic of this study is explored trough four researchquestions. Firstly, what kind of management control systems (MCS) use or could use the data and information enabled by the BI system? Secondly, how the BI system is or could be utilized? Thirdly, has BI system enabled new forms of control or changed old ones? The fourth and final research question is whether the BI system supports some forms of control that the literature has not thought of, or is the BI system not used for some forms of control the literature suggests it should be used? The study is conducted as an extensive case study. Three different organizations were interviewed for the study.

In the empirical part of the study the case organizations, their BI systems, and the ways they utilize these systems for management control are presented. The main findings of the study are that BI systems can be utilized in the fields suggested in the literature, namely in planning, cybernetic, reward, boundary, and interactive control. The systems are used both as the data or information feeders and directly as the tools. Using BI systems has also enabled entirely new forms of control in the studied organizations, most significantly in the area of interactive control. They have also changed the old control systems by making the information more readily available to the whole organization. No evidence of the BI systems being used for forms of control that the literature had not suggested was found. The systems were mostly used for cybernetic control and interactive control, whereas the support for other types of control was not as prevalent.

The main contribution of the study to the existing literature is the insight provided into how BI systems, both theoretically and empirically, are used for management control. The framework for
business intelligence in management control presented in the study can also be utilized in further studies about the subject.