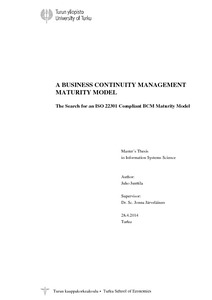 BCM (business continuity Management) is a holistic management process aiming at ensuring business continuity and building organizational resilience. Maturity models offer organizations a tool for evaluating their current maturity in a certain process. In the recent years BCM has been subject to international ISO standardization, while the interest of organizations to bechmark their state of BCM agains standards and the use of maturity models for these asessments has increased. However, although new standards have been introduced, very little attention has been paid to reviewing the existing BCM maturity models in research - especially in the light of the new ISO 22301 standard for BCM. In this thesis the existing BCM maturily models are carefully evaluated to determine whetherthey could be improved. In order to accomplish this, the compliance of the existing models to the ISO 22301 standard is measured and a framework for assessing a maturitymodel´s quality is defined.

After carefully evaluating the existing frameworks for maturity model development and evaluation, an approach suggested by Becker et al. (2009) was chosen as the basis for the research. An additionto the procedural model a set of seven research guidelines proposed by the same authors was applied, drawing on the design-science research guidelines as suggested by Hevner et al. (2004). Furthermore, the existing models´ form and function was evaluated to address their usability. Based on the evaluation of the existing BCM maturity models, the existing models were found to have shortcomings in each dimension of the evaluation. Utilizing the best of the existing models, a draft version for an enhanced model was developed. This draft model was then iteratively developed by conducting six semi-structured interviews with BCM professionals in finland with the aim of validating and improving it. As a Result, a final version of the enhanced BCM maturity model was developed, conforming to the seven key clauses in the ISO 22301 standard and the maturity model development guidelines suggested by Becker et al. (2009).