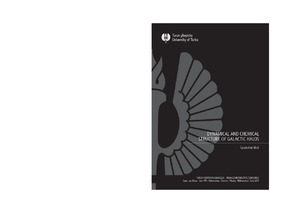 This doctoral dissertation presents studies of the formation and evolution of galaxies, through observations and simulations of galactic halos. The halo is the component of galaxies which hosts some of the oldest objects we know of in the cosmos; it is where clues to the history of galaxies are found, for example, by how the chemical structure is related to the dynamics of objects in the halo. The dynamical and chemical structure of halos, both in the Milky Way’s own halo, and in two elliptical galaxies, is the underlying theme in the research. I focus on the density falloff and chemistry of the two external halos, and on the dynamics, density falloff, and chemistry of the Milky Way halo.

I first study galactic halos via computer simulations, to test the long- term stability of an anomalous feature recently found in kinematics of the Milky Way’s metal-poor stellar halo. I find that the feature is transient, making its origin unclear. I use a second set of simulations to test if an initially strong relation between the dynamics and chemistry of halo glob-ular clusters in a Milky Way-type galaxy is affected by a merging satellite galaxy, and find that the relation remains strong despite a merger in which the satellite is a third of the mass of the host galaxy.

From simulations, I move to observing halos in nearby galaxies, a challenging procedure as most of the light from galaxies comes from the disk and bulge components as opposed to the halo. I use Hubble Space Tele scope observations of the halo of the galaxy M87 and, comparing to similar observations of NGC 5128, find that the chemical structure of the inner halo is similar for both of these giant elliptical galaxies.

I use Very Large Telescope observations of the outer halo of NGC 5128 (Centaurus A) and, because of the difficultly in resolving dim extragalac- tic stellar halo populations, I introduce a new technique to subtract the contaminating background galaxies. A transition from a metal-rich stellar halo to a metal-poor has previously been discovered in two different types of galaxies, the disk galaxy M31 and the classic elliptical NGC 3379. Unexpectedly, I discover in this third type of galaxy, the merger remnant NGC 5128, that the density of metal-rich and metal-poor halo stars falls at the same rate within the galactocentric radii of 8 − 65 kpc, the limit of our observations. This thesis presents new results which open opportunities for future investigations.