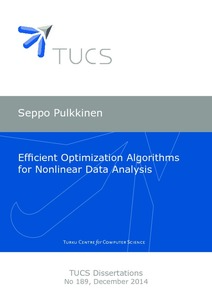 Identification of low-dimensional structures and main sources of variation from multivariate data are fundamental tasks in data analysis. Many methods aimed at these tasks involve solution of an optimization problem. Thus, the objective of this thesis is to develop computationally efficient and theoretically justified methods for solving such problems.

Most of the thesis is based on a statistical model, where ridges of the density estimated from the data are considered as relevant features. Finding ridges, that are generalized maxima, necessitates development of advanced optimization methods. An efficient and convergent trust region Newton method for projecting a point onto a ridge of the underlying density is developed for this purpose. The method is utilized in a differential equation-based approach for tracing ridges and computing projection coordinates along them. The density estimation is done nonparametrically by using Gaussian kernels. This allows application of ridge-based methods with only mild assumptions on the underlying structure of the data.

The statistical model and the ridge finding methods are adapted to two different applications. The first one is extraction of curvilinear structures from noisy data mixed with background clutter. The second one is a novel nonlinear generalization of principal component analysis (PCA) and its extension to time series data. The methods have a wide range of potential applications, where most
of the earlier approaches are inadequate. Examples include identification of faults from seismic data and identification of filaments from cosmological data. Applicability of the nonlinear PCA to climate analysis and reconstruction of periodic patterns from noisy time series data are also demonstrated.

Other contributions of the thesis include development of an efficient semidefinite optimization method for embedding graphs into the Euclidean space. The method produces structure-preserving embeddings that maximize interpoint distances. It is primarily developed for dimensionality reduction, but has also potential applications in graph theory and various areas of physics, chemistry
and engineering. Asymptotic behaviour of ridges and maxima of Gaussian kernel densities is also investigated when the kernel bandwidth approaches infinity. The results are applied to the nonlinear PCA and to finding significant maxima of such densities, which is a typical problem in visual object tracking.