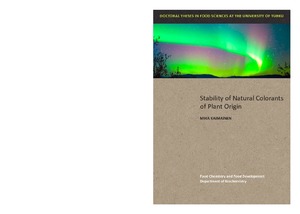 In recent years, there have been studies that show a correlation between the hyperactivity of children and use of artificial food additives, including colorants. This has, in part, led to preference of natural products over products with artificial additives. Consumers have also become more aware of health issues. Natural food colorants have many bioactive functions, mainly vitamin A activity of carotenoids and antioxidativity, and therefore they could be more easily accepted by the consumers. However, natural colorant compounds are usually unstable, which restricts their usage. Microencapsulation could be one way to enhance the stability of natural colorant compounds and thus enable better usage for them as food colorants. Microencapsulation is a term used for processes in which the active material is totally enveloped in a coating or capsule, and thus it is separated and protected from the surrounding environment. In addition to protection by the capsule, microencapsulation can also be used to modify solubility and other properties of the encapsulated material, for example, to incorporate fat-soluble compounds into aqueous matrices.

Lutein was incorporated into oil-in-water (o/w) emulsions with a polar oil fraction from oat (Avena sativa) as an emulsifier and mixtures of guar gum and xanthan gum or locust bean gum and xanthan gum as stabilizers to retard creaming. The stability of lutein in these emulsions was quite good, with 77 to 91 percent of lutein being left after storage in the dark at 20 to 22°C for 10 weeks whereas in spray dried emulsions the retention of lutein was 67 to 75 percent. The retention of lutein in oil was also good at 85 percent. Betanin was incorporated into the inner w1 water phase of a water1-in-oil-inwater2 (w1/o/w2) double emulsion with primary w1/o emulsion droplet size of 0.34 μm and secondary w1/o/w2 emulsion droplet size of 5.5 μm and encapsulation efficiency of betanin of 89 percent. In vitro intestinal lipid digestion was performed on the double emulsion, and during the first two hours, coalescence of the inner water phase droplets was observed, and the sizes of the double emulsion droplets increased quickly because of aggregation. This period also corresponded to gradual release of betanin, with a final release of 35 percent. The double emulsion structure was retained throughout the three-hour experiment.

In conclusion, this thesis describes novel solvent-free extraction and encapsulation processes for lutein and betanin from plant sources. Lutein showed good stability in oil and in o/w emulsions, but slightly inferior in spray dried emulsions. In vitro intestinal lipid digestion showed a good stability of w1/o/w2 double emulsion and quite high retention of betanin during digestion. Consumer acceptance of model juices colored with spray dried betanin was not as good as model juices colored with anthocyanins, but addition of betanin to real berry juice could produce better results with mixture of added betanin and natural berry anthocyanins could produce a more acceptable color. Overall, further studies are needed to obtain natural colorants with good stability for the use in food products.