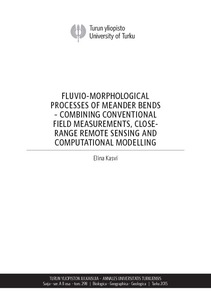 Meandering rivers have been perceived to evolve rather similarly around the world independently of the location or size of the river. Despite the many consistent processes and characteristics they have also been noted to show complex and unique sets of fluviomorphological processes in which local factors play important role. These complex interactions of flow and morphology affect notably the development of the river. Comprehensive and fundamental field, flume and theoretically based studies of fluviomorphological processes in meandering rivers have been carried out especially during the latter part of the 20th century. However, as these studies have been carried out with traditional field measurements techniques their spatial and temporal resolution is not competitive to the level achievable today. The hypothesis of this study is that, by exploiting e increased spatial and temporal resolution of the data, achieved by combining conventional field measurements with a range of modern technologies, will provide new insights to the spatial patterns of the flow-sediment interaction in meandering streams, which have perceived to show notable variation in space and time. This thesis shows how the modern technologies can be combined to derive very high spatial and temporal resolution data on fluvio-morphological processes over meander bends. The flow structure over the bends is recorded in situ using acoustic Doppler current profiler (ADCP) and the spatial and temporal resolution of the flow data is enhanced using 2D and 3D CFD over various meander bends. The CFD are also exploited to simulate sediment transport. Multi-temporal terrestrial laser scanning (TLS), mobile laser scanning (MLS) and echo sounding data are used to measure the flow-based changes and formations over meander bends and to build the computational models. The spatial patterns of erosion and deposition over meander bends are analysed relative to the measured and modelled flow field and sediment transport. The results are compared with the classic theories of the processes in meander bends. Mainly, the results of this study follow well the existing theories and results of previous studies. However, some new insights regarding to the spatial and temporal patterns of the flow-sediment interaction in a natural sand-bed meander bend are provided. The results of this study show the advantages of the rapid and detailed measurements techniques and the achieved spatial and temporal resolution provided by CFD, unachievable with field measurements. The thesis also discusses the limitations which remain in the measurement and modelling methods and in understanding of fluvial geomorphology of meander bends. Further, the hydro- and morphodynamic models’ sensitivity to user-defined parameters is tested, and the modelling results are assessed against detailed field measurement. The study is implemented in the meandering sub-Arctic Pulmanki River in Finland. The river is unregulated and sand-bed and major morphological changes occur annually on the meander point bars, which are inundated only during the snow-melt-induced spring floods. The outcome of this study applies to sandbed meandering rivers in regions where normally one significant flood event occurs annually, such as Arctic areas with snow-melt induced spring floods, and where the point bars of the meander bends are inundated only during the flood events.