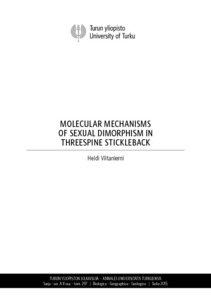 Sexual dimorphism is commonly understood as differences in external features, such as morphological features or coloration. However, it can more broadly encompass behavior and physiology and at the core of these differences is the genetic mechanism – mRNA and protein expression. How, and which, molecular mechanisms influence sexually dimorphic features is not well understood thus far. DNA, RNA and proteins are the template required to create the phenotype of an individual, and they are connected to each other via processes of transcription and translation. As the genome of males and females are almost identical with the exception of the few genes on the sex chromosome or the sex-determining alleles (in the case of organisms without sex chromosomes), it is likely that many of the downstream processes resulting in sexual dimorphism are produced by changes in gene regulation and result from a regulatory cascade and not from a vastly different gene composition. Thus, in this thesis a systems biology approach is used to understand sexual dimorphism at all molecular levels and how different genomic features, e.g. sex chromosome evolution, can affect the interplay of these molecules.

The threespine stickleback, Gasterosteus aculeatus, is used as the model to investigate molecular mechanisms of sexual dimorphism. It has well-characterized ecology and behavior, especially in the breeding season when sexual dimorphism is high. Moreover, threespine stickleback has a recently evolved Y chromosome in the early stages of sex chromosome evolution, characterized by a lack of recombination leading to degeneration (i.e. gene loss).

The aim of my thesis is to investigate how the genotype links to the molecular phenotype and relates to differences in molecular expression between males and females. Based on previous research on sex differences in mRNA expression, I investigated sex-biased protein expression in adult fish outside the breeding season to see if differences persisted after translation. As sex-biased expression also prevailed in the proteome and previous transcription expression seemed to be related to the sex chromosomes, I investigated the genome level with a particular focus on the sex-chromosomes. I characterized the status of Y chromosome degeneration in the threespine stickleback and its effects on gene function. Furthermore, since the degeneration process leaves genes in a single copy in males, I examined whether the resulting dosage difference of messenger RNA for hemizygous genes is compensated as it is in other organisms. In addition, threespine sticklebacks have wellcharacterized behavioral differences related to the male’s social status during the breeding season. To understand the connection between the genotype and behavior, I examined gene expression patterns related to breeding behavior using dominant and subordinate males as well as female