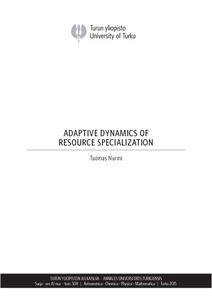 Ecological specialization in resource utilization has various facades ranging from nutritional resources via host use of parasites or phytophagous insects to local adaptation in different habitats. Therefore, the evolution of specialization affects the evolution of most other traits, which makes it one of the core issues in the theory of evolution. Hence, the evolution of specialization has gained enormous amounts of research interest, starting already from Darwin’s Origin of species in 1859. Vast majority of the theoretical studies has, however, focused on the mathematically most simple case with well-mixed populations and equilibrium dynamics. This thesis explores the possibilities to extend the evolutionary analysis of resource usage to spatially heterogeneous metapopulation models and to models with non-equilibrium dynamics. These extensions are enabled by the recent advances in the field of adaptive dynamics, which allows for a mechanistic derivation of the invasion-fitness function based on the ecological dynamics. In the evolutionary analyses, special focus is set to the case with two substitutable renewable resources. In this case, the most striking questions are, whether a generalist species is able to coexist with the two specialist species, and can such trimorphic coexistence be attained through natural selection starting from a monomorphic population. This is shown possible both due to spatial heterogeneity and due to non-equilibrium dynamics. In addition, it is shown that chaotic dynamics may sometimes inflict evolutionary suicide or cyclic evolutionary dynamics. Moreover, the relations between various ecological parameters and evolutionary dynamics are investigated. Especially, the relation between specialization and dispersal propensity turns out to be counter-intuitively non-monotonous. This observation served as inspiration to the analysis of joint evolution of dispersal and specialization, which may provide the most natural explanation to the observed coexistence of specialist and generalist species.