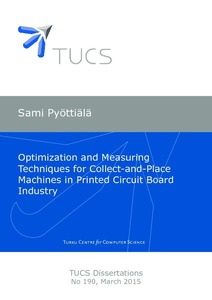 This thesis considers optimization problems arising in printed circuit board assembly.
Especially, the case in which the electronic components of a single circuit
board are placed using a single placement machine is studied. Although there is a
large number of different placement machines, the use of collect-and-place -type
gantry machines is discussed because of their flexibility and increasing popularity
in the industry.
Instead of solving the entire control optimization problem of a collect-andplace
machine with a single application, the problem is divided into multiple subproblems
because of its hard combinatorial nature. This dividing technique is
called hierarchical decomposition. All the subproblems of the one PCB - one
machine -context are described, classified and reviewed. The derived subproblems
are then either solved with exact methods or new heuristic algorithms are developed
and applied. The exact methods include, for example, a greedy algorithm and
a solution based on dynamic programming. Some of the proposed heuristics contain
constructive parts while others utilize local search or are based on frequency
calculations.
For the heuristics, it is made sure with comprehensive experimental tests that
they are applicable and feasible. A number of quality functions will be proposed
for evaluation and applied to the subproblems. In the experimental tests, artificially
generated data from Markov-models and data from real-world PCB production are
used. The thesis consists of an introduction and of five publications where the
developed and used solution methods are described in their full detail. For all the
problems stated in this thesis, the methods proposed are efficient enough to be used
in the PCB assembly production in practice and are readily applicable in the PCB
manufacturing industry.