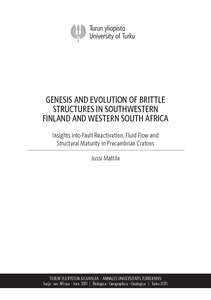 The bedrock of old crystalline cratons is characteristically saturated with brittle structures formed during successive superimposed episodes of deformation and under varying stress regimes. As a result, the crust effectively deforms through the reactivation of pre-existing structures rather than by through the activation, or generation, of new ones, and is said to be in a state of 'structural maturity'. By combining data from Olkiluoto Island, southwestern Finland, which has been investigated as the potential site of a deep geological repository for high-level nuclear waste, with observations from southern Sweden, it can be concluded that the southern part of the Svecofennian shield had already attained structural maturity during the Mesoproterozoic era. This indicates that the phase of activation of the crust, i.e. the time interval during which new fractures were generated, was brief in comparison to the subsequent reactivation phase. Structural maturity of the bedrock was also attained relatively rapidly in Namaqualand, western South Africa, after the formation of first brittle structures during Neoproterozoic time. Subsequent brittle deformation in Namaqualand was controlled by the reactivation of pre-existing strike-slip faults.In such settings, seismic events are likely to occur through reactivation of pre-existing zones that are favourably oriented with respect to prevailing stresses. In Namaqualand, this is shown for present day seismicity by slip tendency analysis, and at Olkiluoto, for a Neoproterozoic earthquake reactivating a Mesoproterozoic fault.

By combining detailed field observations with the results of paleostress inversions and relative and absolute time constraints, seven distinctm superimposed paleostress regimes have been recognized in the Olkiluoto region. From oldest to youngest these are: (1) NW-SE to NNW-SSE transpression, which prevailed soon after 1.75 Ga, when the crust had sufficiently cooled down to allow brittle deformation to occur. During this phase conjugate NNW-SSE and NE-SW striking strike-slip faults were active simultaneous with reactivation of SE-dipping low-angle shear zones and foliation planes. This was followed by (2) N-S to NE-SW transpression, which caused partial reactivation of structures formed in the first event; (3) NW-SE extension during the Gothian orogeny and at the time of rapakivi magmatism and intrusion of diabase dikes; (4) NE-SW transtension that occurred between 1.60 and 1.30 Ga and which also formed the NW-SE-trending Satakunta graben located some 20 km north of Olkiluoto. Greisen-type veins also formed during this phase. (5) NE-SW compression that postdates both the formation of the 1.56 Ga rapakivi granites and 1.27 Ga olivine diabases of the region; (6) E-W transpression during the early stages of the Mesoproterozoic Sveconorwegian orogeny and which also predated (7) almost coaxial E-W extension attributed to the collapse of the Sveconorwegian orogeny.

The kinematic analysis of fracture systems in crystalline bedrock also provides a robust framework for evaluating fluid-rock interaction in the brittle regime; this is essential in assessment of bedrock integrity for numerous geo-engineering applications, including groundwater management, transient or permanent CO2 storage and site investigations for permanent waste disposal. Investigations at Olkiluoto revealed that fluid flow along fractures is coupled with low normal tractions due to in-situ stresses and thus deviates from the generally accepted critically stressed fracture concept, where fluid flow is concentrated on fractures on the verge of failure. The difference is linked to the shallow conditions of Olkiluoto - due to the low differential stresses inherent at shallow depths, fracture activation and fluid flow is controlled by dilation due to low normal tractions. At deeper settings, however, fluid flow is controlled by fracture criticality caused by large differential stress, which drives shear deformation instead of dilation.