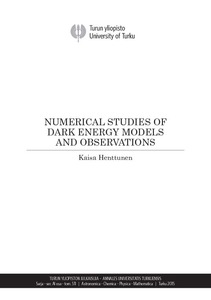 The cosmological standard view is based on the assumptions of homogeneity, isotropy and general relativistic gravitational interaction. These alone are not sufficient for describing the current cosmological observations of accelerated expansion of space. Although general relativity is extremely accurately tested to describe the local gravitational phenomena, there is a strong demand for modifying either the energy content of the universe or the gravitational interaction itself to account for the accelerated expansion. By adding a non-luminous matter component and a constant energy component with negative pressure, the observations can be explained with general relativity.