Intracranial Nimodipine Implant: Feasibility and Implications for the Treatment of Subarachnoid Hemorrhage – A Pre-Clinical Study

Intracranial Nimodipine Implant: Feasibility and Implications for the Treatment of Subarachnoid Hemorrhage – A Pre-Clinical Study 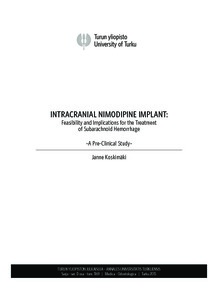 Intracranial aneurysmal subarachnoid hemorrhage (aSAH) is a life-threatening condition requiring immediate neurocritical care. A ruptured aneurysm must be isolated from arterial circulation to prevent rebleeding. Open surgical clipping of the neck of the aneurysm or intra-arterial filling of the aneurysm sack with platinum coils are major treatment strategies in an acute phase. About 40% of the patients suffering from aSAH die within a year of the bleeding despite the intensive treatment. After aSAH, the patient may develop a serious complication called vasospasm. Major risk for the vasospasm takes place at days 5–14 after the primary bleeding. In vasospasm, cerebral arteries contract uncontrollably causing brain ischemia that may lead to death. Nimodipine (NDP) is used to treat of vasospasm and it is administrated intravenously or orally every four hours for 21 days. NDP treatment has been scientifically proven to improve patients’ clinical outcome.

The therapeutic effect of L-type calcium channel blocker NDP is due to the ability to dilate cerebral arteries. In addition to vasodilatation, recent research has shown the pleiotropic effect of NDP such as inhibition of neuronal apoptosis and inhibition of microthrombi formation. Indeed, NDP inhibits cortical spreading ischemia. Knowledge of the pathophysiology of the vasospasm has evolved in recent years to a complex entity of early brain injury, secondary injuries and cortical spreading ischemia, instead of being pure intracranial vessel spasm.

High NDP levels are beneficial since they protect neurons and inhibit the cortical spreading ischemia. One of the drawbacks of the intravenous or oral administration of NPD is systemic hypotension, which is harmful particularly when the brain is injured. Maximizing the beneficial effects and avoiding systemic hypotension of NDP, we developed a sustained release biodegradable NDP implant that was surgically positioned in the basal cistern of animal models (dog and pig). Higher concentrations were achieved locally and lower concentrations systemically. Using this treatment approach in humans, it may be possible to reduce incidence of harmful hypotension and potentiate beneficial effects of NDP on neurons.

Intracellular calcium regulation has a pivotal role in brain plasticity. NDP blocks L-type calcium channels in neurons, substantially decreasing intracellular calcium levels. Thus, we were interested in how NDP affects brain plasticity and tested the hypothesis in a mouse model. We found that NDP activates Brain-derived neurotrophic factor (BDNF) receptor TrkB and its downstream signaling in a reminiscent of antidepressant drugs. In contrast to antidepressant drugs, NDP activates Akt, a major survival-promoting factor. Our group’s previous findings demonstrate that long-term antidepressant treatment reactivates developmental-type of plasticity mechanisms in the adult brain, which allows the remodeling of neuronal networks if combined with appropriate rehabilitation. It seems that NDP has antidepressant-like properties and it is able to induce neuronal plasticity. In general, drug induced neuronal plasticity has a huge potential in neurorehabilitation and more studies are warranted.