Bumblebees in a Changing Climate: Evaluating the Effects of Temperature on Queen Performance 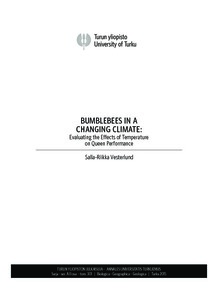 Bumblebees are a very essential group of pollinating insects, but their populations have declined drastically during the past decades. We need to understand why their numbers are decreasing and what can be done to reverse this trend. Climate change-related phenomena, such as changes in the overwintering temperatures and spring conditions, are among the most prominent threats to bumblebees.

Queens have a special role in the lifecycle of bumblebees because they overwinter and start new colonies the next year. Their successful performance: survival, overwintering ability, longevity, immune competence, and nest establishing capability in spring, is highly important for bumblebee populations. However, the effects of climate change on bumblebee queen performance remain unknown. The main objective of this thesis was to assess how temperature affects the performance of bumblebee queens during and after overwintering.

The effects of warm temperature predicted by climate change scenarios on queen survival and stress-tolerance were studied by a four-month artificial diapause of bumblebee queens at two temperatures (9°C and 1.8°C). Bumblebee colonies were also reared in a laboratory and factors affecting colony characteristics were examined. In addition, queen performance during spring was studied in a starvation experiment using two temperatures (15°C as normal; 24°C as warmer than average) and queens collected from nature right after their emergence.

My research revealed how temperature affects queen performance, and queen size was found to be an important factor determining the direction of some of these effects. We found a 0.4g weight threshold for bumblebee queens to be able to survive overwintering. In addition, during mild winters, larger queens have a higher chance than smaller ones to survive through winter and also to cope with immunological stresses after overwintering. During cold conditions, which are normal in the current climatic situation, this advantage disappears. In the spring starvation experiment, the starved queens survived approximately eight days longer in 15°C than in 24°C, which means that starvation risk rises significantly with increasing spring temperature, in a situation where food is scarce due to for example frost damage or asynchrony between bumblebees and their important food plants.

These results could mean that in the future climate, larger queens are better able to survive the winter, initiate their nests and start rearing their offspring. This may be problematic, because I also detected two alternative strategies of colony development that differ between large and small queens; larger queens start to lay eggs earlier at nest initiation, their colonies mature later, they produce more workers, and they have a more strongly male biased sex allocation compared with smaller queens. If larger queens have a greater change of producing offspring after a mild winter, this could lead to a significant decline in the total production of new queens at a population level. Thus, it seems that queen size could act as one mechanism regulating the population level outcomes in different temperatures.

The new information presented in my thesis reinforces that basic research, monitoring, and local species conservation of bumblebees both in Finland and globally must be increased to ensure that this highly important pollinator group survives in the face of climate change.