Wood biochemicals for the protection of health. Focus on hemicellulose, stilbenoids and lignans

Wood biochemicals for the protection of health. Focus on hemicellulose, stilbenoids and lignans 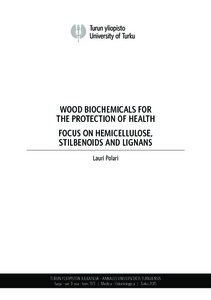 Trees produce an enormous amount of compounds that are still scantly utilized.However, the results obtained from structurally similar biochemicals suggest that wood-derived compounds could be used for the protection of health in various applications. Polyphenols, for instance, could be extracted from wood in high quantities. Similar polyphenols to those in wood include resveratrol, found in grapes, and secoisolariciresinol, present in flaxseeds. Their consumption has been inversely associated with the incidence of various diseases, especially certain cancers and obesity-related disorders.

The aim of this study was to determine the health-promoting effects of woodderived biochemicals. The effect of spruce hemicellulose on the growth of probiotic intestinal bacteria was studied. The results suggest that the bifidobacteria and lactobacilli can utilize hemicellulose and thus it has potential as a prebiotic compound.

In particular, the efficacy of pine polyphenols to inhibit the growth of prostate cancer was our main interest. It was found that stilbenoids and lignans inhibited the proliferation of various cancer cells, and reduced the growth of prostate cancer xenografts in mice. The polyphenol rich pine knot extract was well tolerated in diet and extract-derived polyphenols were rapidly absorbed after intake. Furthermore, we determined the effect of the dietary pine knot extract on the weight gain and the expression of aromatase gene in reporter mouse expressing the promoter region of a human aromatase gene. It was found that dietary pine knot extract alleviated the obesity-induced inflammation in adipose tissue and downregulated the expression of a human aromatase gene.

Taken together, several components of spruce and pine may have a future role as health-promoting compounds.