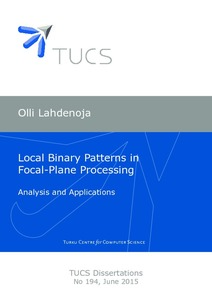 Feature extraction is the part of pattern recognition, where the sensor data is transformed into a more suitable form for the machine to interpret. The purpose of this step is also to reduce the amount of information passed to the next stages of the system, and to preserve the essential information in the view of discriminating the data into different classes. For instance, in the case of image analysis the actual image intensities are vulnerable to various environmental effects, such as lighting changes and the feature extraction can be used as means for detecting features, which are invariant to certain types of illumination changes. Finally, classification tries to make decisions based on the previously transformed data.

The main focus of this thesis is on developing new methods for the embedded feature extraction based on local non-parametric image descriptors. Also, feature analysis is carried out for the selected image features. Low-level Local Binary Pattern (LBP) based features are in a main role in the analysis. In the embedded domain, the pattern recognition system must usually meet strict performance constraints, such as high speed, compact size and low power consumption. The characteristics of the final system can be seen as a trade-off between these metrics, which is largely affected by the decisions made during the implementation phase. The implementation alternatives of the LBP based feature extraction are explored in the embedded domain in the context of focal-plane vision processors.

In particular, the thesis demonstrates the LBP extraction with MIPA4k massively parallel focal-plane processor IC. Also higher level processing is incorporated to this framework, by means of a framework for implementing a single chip face recognition system. Furthermore, a new method for determining optical flow based on LBPs, designed in particular to the embedded domain is presented. Inspired by some of the principles observed through the feature analysis of the Local Binary Patterns, an extension to the well known non-parametric rank transform is proposed, and its performance is evaluated in face recognition experiments with a standard dataset. Finally, an a priori model where the LBPs are seen as combinations of n-tuples is also presented