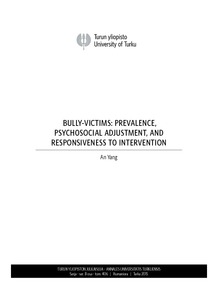 In this thesis, a unique subgroup involved in the bullying phenomenon, the bully-victims, are identified and examined. Despite the increasing attention on the bully-victims in recent years, their prevalence, psychosocial adjustment, and response to anti-bullying programs has not been clearly determined. Three empirical studies were conducted in this thesis to examine the prevalence of bully-victims. Moreover, in study I, the psychosocial adjustment of bully-victims was compared with that of pure bullies, pure victims, and non-involved students. In study II, different forms of bullying and victimization were compared among pure bullies, pure victims, bully-victims, and non-involved students. In study III, the effectiveness of anti-bullying programs, in particular, the KiVa program, on bully-victims was demonstrated. Overall, bully-victims formed the smallest group comparing with pure bullies, pure victims, and non-involved students, and in general differed from pure bullies rather than pure victims in terms of subjective experience of maladjustment. They employed more verbal, physical, and cyberbullying perpetration, but not indirect bullying; and they were more victimized by verbal, physical, cyber, and indirect bullying. The KiVa anti-bullying program in Finland is effective in reducing the prevalence of bully-victims.