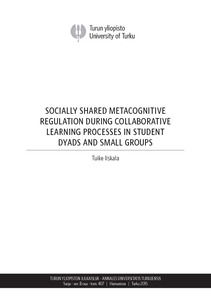 Traditionally metacognition has been theorised, methodologically studied and empirically tested from the standpoint mainly of individuals and their learning contexts. In this dissertation the emergence of metacognition is analysed more broadly. The aim of the dissertation was to explore socially shared metacognitive regulation (SSMR) as part of collaborative learning processes taking place in student dyads and small learning groups. The specific aims were to extend the concept of individual metacognition to SSMR, to develop methods to capture and analyse SSMR and to validate the usefulness of the concept of SSMR in two different learning contexts; in face-to-face student dyads solving mathematical word problems and also in small groups taking part in inquiry-based science learning in an asynchronous computer-supported collaborative learning (CSCL) environment. This dissertation is comprised of four studies.

In Study III, the aim was to expand the research on SSMR from face-to-face mathematical problem solving in student dyads to inquiry-based science learning among small groups in an asynchronous computer-supported collaborative learning (CSCL) environment. The specific aims were to investigate SSMR’s evolvement and functions in a CSCL environment and to explore how SSMR emerges at different phases of the inquiry process. Finally, individual student participation in SSMR during the process was studied. An in-depth explanatory case study of one small group of four girls aged 12 years was carried out. The girls attended a class that has an entrance examination and conducts a language-enriched curriculum. The small group solved complex science problems in an asynchronous CSCL environment, participating in research-like processes of inquiry during 22 lessons (á 45–minute). Students’ network discussion were recorded in written notes (N=640) which were used as study data. A set of notes, referred to here as a ‘thread’, was used as the unit of analysis. The inter-coder agreement was regarded as substantial. The results indicated that SSMR emerges in a small group’s asynchronous CSCL inquiry process in the science domain. Hence, the results of Study III were in line with the previous Study I and Study II and revealed that metacognition cannot be reduced to the individual level alone. The findings also confirm that SSMR should be examined as a process, since SSMR can evolve during different phases and that different SSMR threads overlapped and intertwined. Although the classification of SSMR’s functions was applicable in the context of CSCL in a small group, the dominant function was different in the asynchronous CSCL inquiry in the small group in a science activity than in mathematical word problem solving among student dyads (Study II). Further, the use of different analytical methods provided complementary findings about students’ participation in SSMR. The findings suggest that it is not enough to code just a single written note or simply to examine who has the largest number of notes in the SSMR thread but also to examine the connections between the notes. As the findings of the present study are based on an in-depth analysis of a single small group, further cases were examined in Study IV, as well as looking at the SSMR’s focus, which was also studied in a face-to-face context.

In Study IV, the general aim was to investigate the emergence of SSMR with a larger data set from an asynchronous CSCL inquiry process in small student groups carrying out science activities. The specific aims were to study the emergence of SSMR in the different phases of the process, students’ participation in SSMR, and the relation of SSMR’s focus to the quality of outcomes, which was not explored in previous studies. The participants were 12-year-old students from the same class as in Study III. Five small groups consisting of four students and one of five students (N=25) were involved in the study. The small groups solved ill-defined science problems in an asynchronous CSCL environment, participating in research-like processes of inquiry over a total period of 22 hours. Written notes (N=4088) detailed the network discussions of the small groups and these constituted the study data. With these notes, SSMR threads were explored. As in Study III, the thread was used as the unit of analysis. In total, 332 notes were classified as forming 41 SSMR threads. Inter-coder agreement was assessed by three coders in the different phases of the analysis and found to be reliable. Multiple methods of analysis were used. Results showed that SSMR emerged in all the asynchronous CSCL inquiry processes in the small groups. However, the findings did not reveal any significantly changing trend in the emergence of SSMR during the process. As a main trend, the number of notes included in SSMR threads differed significantly in different phases of the process and small groups differed from each other. Although student participation was seen as highly dispersed between the students, there were differences between students and small groups. Furthermore, the findings indicated that the amount of SSMR during the process or participation structure did not explain the differences in the quality of outcomes for the groups. Rather, when SSMRs were focused on understanding and procedural matters, it was associated with achieving high quality learning outcomes. In turn, when SSMRs were focused on incidental and procedural matters, it was associated with low level learning outcomes. Hence, the findings imply that the focus of any emerging SSMR is crucial to the quality of the learning outcomes. Moreover, the findings encourage the use of multiple research methods for studying SSMR.

In total, the four studies convincingly indicate that a phenomenon of socially shared metacognitive regulation also exists. This means that it was possible to define the concept of SSMR theoretically, to investigate it methodologically and to validate it empirically in two different learning contexts across dyads and small groups. In-depth micro-level case analysis in Studies I and III showed the possibility to capture and analyse in detail SSMR during the collaborative process, while in Studies II and IV, the analysis validated the emergence of SSMR in larger data sets. Hence, validation was tested both between two environments and within the same environments with further cases. As a part of this dissertation, SSMR’s detailed functions and foci were revealed. Moreover, the findings showed the important role of observable metacognitive experiences as the starting point of SSMRs. It was apparent that problems dealt with by the groups should be rather difficult if SSMR is to be made clearly visible. Further, individual students’ participation was found to differ between students and groups. The multiple research methods employed revealed supplementary findings regarding SSMR. Finally, when SSMR was focused on understanding and procedural matters, this was seen to lead to higher quality learning outcomes. Socially shared metacognition regulation should therefore be taken into consideration in students’ collaborative learning at school similarly to how an individual’s metacognition is taken into account in individual learning.