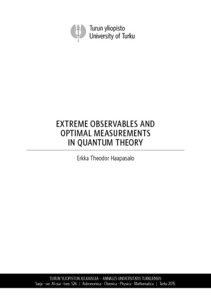 Optimization of quantum measurement processes has a pivotal role in carrying out better, more accurate or less disrupting, measurements and experiments on a quantum system. Especially, convex optimization, i.e., identifying the extreme points of the convex sets and subsets of quantum measuring devices plays an important part in quantum optimization since the typical ﬁgures of merit for measuring processes are aﬃne functionals. In this thesis, we discuss results determining the extreme quantum devices and their relevance, e.g., in quantum-compatibility-related questions. Especially, we see that a compatible device pair where one device is extreme can be joined into a single apparatus essentially in a unique way. Moreover, we show that the question whether a pair of quantum observables can be measured jointly can often be formulated in a weaker form when some of the observables involved are extreme.

Another major line of research treated in this thesis deals with convex analysis of special restricted quantum device sets, covariance structures or, in particular, generalized imprimitivity systems. Some results on the structure ofcovariant observables and instruments are listed as well as results identifying the extreme points of covariance structures in quantum theory. As a special case study, not published anywhere before, we study the structure of Euclidean-covariant localization observables for spin-0-particles. We also discuss the general form of Weyl-covariant phase-space instruments.