Modulation of TGF-β signaling by Hypoxia 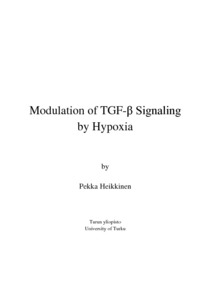 A tumor is a fast-growing malignant tissue. This creates areas inside the tumor that are distant from local blood vessels to be able to get enough oxygen. This hypoxic condition activates a transcription factor called hypoxia inducible factor (HIF). HIF responses help a cell to adapt to decreased oxygen by activating glycolytic and angiogenesis pathways and by regulating apoptotic responses. Hypoxia drives the upregulation of a growth factor called transforming growth factor beta (TGF-beta). Similar to a hypoxia response, TGF is an important regulator of cell fate. TGF-β and HIF pathways regulate partially overlapping target genes. This regulation can also be cooperative. The TGF-beta signal is initiated by activation of plasma membrane receptors that then activate effector proteins called small mothers against decapentaplegic (Smad) homologs. In healthy tissue, TGF-β keeps cell proliferation and growth under control. During cancer progression, TGF-beta has shown a dual role, whereby it inhibits initial tumor formation but, conversely, in an existent tumor, TGF-beta drives malignant progression. Along with HIF and TGF-beta also protein dephosphorylation is an important regulatory mechanism of cell fate. Protein dephosphorylation is catalyzed by protein phosphatases such as Protein phosphatase 2A (PP2A). PP2A is a ubiquitous phosphatase that can exist in various active forms. PP2A can specifically regulate TGF-beta signaling either by enhancing or inhibiting the receptor activity. This work demonstrates that during hypoxia, PP2A is able to fine-tune TGF-beta signal by specifically targeting Smad3 effector in a Smad7-dependent manner. Inactivation of Smad3 in hypoxia leads to malignant conversion of TGF-beta signaling.