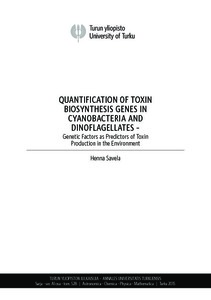 Harmful algal blooms (HABs) are events caused by the massive proliferation of microscopic, often photosynthetic organisms that inhabit both fresh and marine waters. Although HABs are essentially a natural phenomenon, they now cause worldwide concern. Recent anthropogenic effects, such as climate change and eutrophication via nutrient runoff, can be seen in their increased prevalence and severity. Cyanobacteria and dinoflagellates are often the causative organisms of HABs. In addition to adverse effects caused by the sheer biomass, certain species produce highly potent toxic compounds: hepatotoxic microcystins are produced exclusively by cyanobacteria and neurotoxic saxitoxins, also known as paralytic shellfish toxins (PSTs), by both cyanobacteria and dinoflagellates. Specific biosynthetic genes in the cyanobacterial genomes direct the production of microcystin and paralytic shellfish toxins. Recently also the first paralytic shellfish toxin gene sequences from dinoflagellate genomes have been elucidated.

The public health risks presented by HABs are evident, but the monitoring and prediction of toxic events is challenging. Characterization of the genetic background of toxin biosynthesis, including that of microcystins and paralytic shellfish toxins, has made it possible to develop highly sensitive molecular tools which have shown promise in the monitoring and study of potentially toxic microalgae. In this doctoral work, toxin-specific genes were targeted in the developed PCR and qPCR assays for the detection and quantification of potentially toxic cyanobacteria and dinoflagellates in the environment. The correlation between the copy numbers of the toxin biosynthesis genes and toxin production were investigated to assess whether the developed methods could be used to predict toxin concentrations.

The nature of the correlation between gene copy numbers and amount of toxin produced varied depending on the targeted gene and the producing organism. The combined mcyB copy numbers of three potentially microcystin-producing cyanobacterial genera showed significant positive correlation to the observed total toxin production. However, the presence of PST-specific sxtA, sxtG, and sxtB genes of cyanobacterial origin was found to be a poor predictor of toxin production in the studied area. Conversely, the dinoflagellate sxtA4 was a good qualitative indicator of a neurotoxic bloom both in the laboratory and in the field, and population densities reflected well the observed toxin concentrations. In conclusion, although the specificity of each potential targeted toxin biosynthesis gene must be assessed individually during method development, the results obtained in this doctoral study support the use of quantitative PCR -based approaches in the monitoring of toxic cyanobacteria and dinoflagellates.