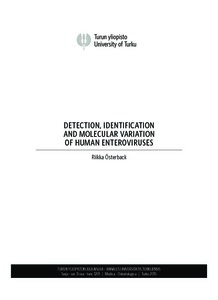 Picornaviruses are the most common human viruses and the identification of the picornaviruses is nowadays based on molecular techniques, for example, reverse transcriptase polymerase chain reaction (RT-PCR). One aim of this thesis was to improve the identification of picornaviruses, especially rhino- and enteroviruses, with a real-time assay format and, also, to improve the differentiation of the viruses with genus-specific locked nucleic acid (LNA) probes. Another aim was to identify and study the causative agent of the enterovirus epidemics that appeared in Finland during seasons 2008-2010.

Moreover, in this thesis enterovirus outbreaks were studied with a well-observed method to create a strain-specific qRT-PCR from the typing region VP1 protein. In a hand-foot-and-mouth-disease (HFMD) outbreak in 2008, the causative agent was identified as CV-A6 and when the molecular evolution of the new HFMD CV-A6 strain was studied it was found that CV-A6 was the emerging agent for HFMD and onychomadesis. Furthermore, unusual E-30 meningitis epidemics that apeared during seasons 2009 and 2010 were studied with strain-specific qRT-PCR. The E-30 affected mostly adolescents and was probably spread in sports teams.