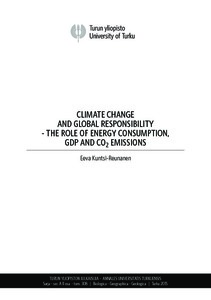 Climate change is one of the biggest challenges faced by this generation. Despite being the single most important environmental challenge facing the planet and despite over two decades of international climate negotiations, global greenhouse gas (GHG) emissions continue to rise. By the middle of this century, GHGs must be reduced by as much as 40-70% if dangerous climate change is to be avoided.

Currently one of the most urgent issues regarding global climate change is to decide the future of the Kyoto Protocol. Negotiations on this topic have already been initiated, with the aim of being finalised by the 2015. This thesis provides insights into the various approaches that can be used to characterise the concept of comparable efforts for developing countries in a future international climate agreement.

The thesis examines the post-Kyoto burden sharing questions for developing countries using the contraction and convergence model, which is one approach that has been proposed to allocate commitments regarding future GHG emissions mitigation. This new approach is a practical tool for the evaluation of the Kyoto climate policy process and global climate change negotiations from the perspective of the developing countries.