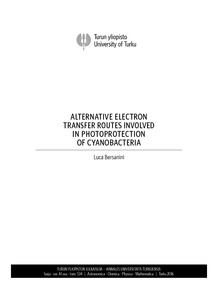 In oxygenic photosynthesis, the highly oxidizing reactions of water splitting produce reactive oxygen species (ROS) and other radicals that could damage the photosynthetic apparatus and affect cell viability. Under particular environmental conditions, more electrons are produced in water oxidation than can be harmlessly used by photochemical processes for the reduction of metabolic electron sinks. In these circumstances, the excess of electrons can be delivered, for instance, to O2, resulting in the production of ROS. To prevent detrimental reactions, a diversified assortment of photoprotection mechanisms has evolved in oxygenic photosynthetic organisms. In this thesis, I focus on the role of alternative electron transfer routes in photoprotection of the cyanobacterium Synechocystis sp. PCC 6803. Firstly, I discovered a novel subunit of the NDH-1 complex, NdhS, which is necessary for cyclic electron transfer around Photosystem I, and provides tolerance to high light intensities. Cyclic electron transfer is important in modulating the ATP/NADPH ratio under stressful environmental conditions. The NdhS subunit is conserved in many oxygenic phototrophs, such as cyanobacteria and higher plants. NdhS has been shown to link linear electron transfer to cyclic electron transfer by forming a bridge for electrons accumulating in the Ferredoxin pool to reach the NDH-1 complexes.

Secondly, I thoroughly investigated the role of the entire flv4-2 operon in the photoprotection of Photosystem II under air level CO2 conditions and varying light intensities. The operon encodes three proteins: two flavodiiron proteins Flv2 and Flv4 and a small Sll0218 protein. Flv2 and Flv4 are involved in a novel electron transport pathway diverting electrons from the QB pocket of Photosystem II to electron acceptors, which still remain unknown. In my work, it is shown that the flv4-2 operon-encoded proteins safeguard Photosystem II activity by sequestering electrons and maintaining the oxidized state of the PQ pool. Further, Flv2/Flv4 was shown to boost Photosystem II activity by accelerating forward electron flow, triggered by an increased redox potential of QB. The Sll0218 protein was shown to be differentially regulated as compared to Flv2 and Flv4. Sll0218 appeared to be essential for Photosystem II accumulation and was assigned a stabilizing role for Photosystem II assembly/repair. It was also shown to be responsible for optimized light-harvesting. Thus, Sll0218 and Flv2/Flv4 cooperate to protect and enhance Photosystem II activity. Sll0218 ensures an increased number of active Photosystem II centers that efficiently capture light energy from antennae, whilst the Flv2/Flv4 heterodimer provides a higher electron sink availability, in turn, promoting a safer and enhanced activity of Photosystem II. This intertwined function was shown to result in lowered singlet oxygen production. The flv4-2 operon-encoded photoprotective mechanism disperses excess excitation pressure in a complimentary manner with the Orange Carotenoid Protein-mediated non-photochemical quenching.

Bioinformatics analyses provided evidence for the loss of the flv4-2 operon in the genomes of cyanobacteria that have developed a stress inducible D1 form. However, the occurrence of various mechanisms, which dissipate excitation pressure at the acceptor side of Photosystem II was revealed in evolutionarily distant clades of organisms, i.e. cyanobacteria, algae and plants.