Photodamage to Oxygen Evolving Complex - An Initial Event in Photoinhibition of Photosystem II.

Photodamage to Oxygen Evolving Complex - An Initial Event in Photoinhibition of Photosystem II. 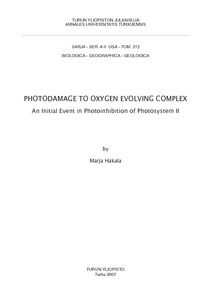 The experimental results above led to the Mn hypothesis of the mechanism of continuous-light-induced photoinhibition. According to the Mn hypothesis, excitation of Mn of OEC results in inhibition of electron donation from OEC to the oxidized primary donor P680+ both under UV and visible light. P680 is oxidized by photons absorbed by chlorophyll, and if not reduced by OEC, P680+ may cause harmful oxidation of other PSII components. Photoinhibition was also induced with intense laser pulses and it was found that the photoinhibitory efficiency increased
in proportion to the square of pulse intensity suggesting that laser-pulse-induced photoinhibition is a two-photon reaction. I further developed the Mn hypothesis suggesting that the initial event in photoinhibition under both continuous and pulsed light is the same: Mn excitation that leads to the inhibition of electron donation from OEC to P680+. Under laser-pulse-illumination, another Mn-mediated inhibitory photoreaction occurs within the duration of the same pulse, whereas under continuous light, secondary damage is chlorophyll mediated. A mathematical model based on the Mn hypothesis was found to explain photoinhibition under continuous light, under flash illumination and under the combination of these two.