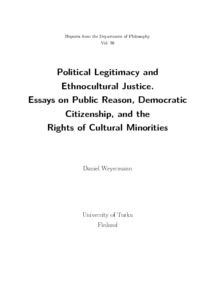 In this thesis, I argue that there are public cultural reasons that can underpin public justiﬁcations of minority rights of indigenous and national minorities in a constitutionaldemocracy. I do so by tackling diverse issues facing a liberal theory of multiculturalism. In the ﬁrst essay, I criticize Will Kymlicka’s comprehensive liberal theory of minority rights and propose a political liberal alternative. The main problem of Will Kymlicka’s theory is that it builds on the contestable liberal value of individual autonomy and thus fails to take diversity seriously. In the second essay, I elaborate on the Rawlsian political liberalism assumed here by criticizing Chandran Kukathas’s version of political liberalism as overly accommodating to diversity. In the third essay, I discuss questions of method that arise for a political liberal approach to the moral-political foundations of multiculturalism, and propose a certain understanding of the political liberal enterprise and its crucial standard of reasonableness. In the fourth essay, I dwell on the political liberal ethic of citizenship and propose a strongly inclusionist interpretation of the duty of civility. In the ﬁfth and last essay, I introduce a certain understanding of ethnocultural justice and propose a view on certain cultural reasons as public cultural reasons. Cultural reasons are public when they are based on necessarily established cultural marks of a democratic polity, as speciﬁed by the cultural establishment view; and when they are crucial for the societal cultural bases of self-respect of citizens. The arguments in this thesis support, and help to spell out, moral-political rights of indigenous and national minorities as formulated in international legal documents, such as the Declaration on the Rights of Indigenous Peoples (United Nations 2007) or the International Covenant on Economic, Social and Cultural Rights (United Nations 1966).