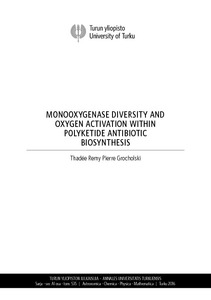 Molecular oxygen (O2) is a key component in cellular respiration and aerobic life. Through the redox potential of O2, the amount of free energy available to organisms that utilize it is greatly increased. Yet, due to the nature of the O2 electron configuration, it is non-reactive to most organic molecules in the ground state. For O2 to react with most organic compounds it must be activated. By activating O2, oxygenases can catalyze reactions involving oxygen incorporation into organic compounds. The oxygen activation mechanisms employed by many oxygenases to have been studied, and they often include transition metals and selected organic compounds.

Despite the diversity of mechanisms for O2 activation explored in this thesis, all of the monooxygenases studied in the experimental part activate O2 through a transient carbanion intermediate.

One of these enzymes is the small cofactorless monooxygenase SnoaB. Cofactorless monooxygenases are unusual oxygenases that require neither transition metals nor cofactors to activate oxygen. Based on our biochemical characterization and the crystal structure of this enzyme, the mechanism most likely employed by SnoaB relies on a carbanion intermediate to activate oxygen, which is consistent with the proposed substrate-assisted mechanism for this family of enzymes.

From the studies conducted on the two-component system AlnT and AlnH, both the functions of the NADH-dependent flavin reductase, AlnH, and the reduced flavin dependent monooxygenase, AlnT, were confirmed. The unusual regiochemistry proposed for AlnT was also confirmed on the basis of the structure of a reaction product. The mechanism of AlnT, as with other flavin-dependent monooxygenases, is likely to involve a caged radical pair consisting of a superoxide anion and a neutral flavin radical formed from an initial carbanion intermediate.

In the studies concerning the engineering of the S-adenosyl-L-methionine (SAM) dependent 4-O-methylase DnrK and the homologous atypical 10-hydroxylase RdmB, our data suggest that an initial decarboxylation of the substrate is catalyzed by both of these enzymes, which results in the generation of a carbanion intermediate. This intermediate is not essential for the 4-O-methylation reaction, but it is important for the 10-hydroxylation reaction, since it enables substrate-assisted activation of molecular oxygen involving a single electron transfer to O2 from a carbanion intermediate. The only role for SAM in the hydroxylation reaction is likely to be stabilization of the carbanion through the positive charge of the cofactor. Based on the DnrK variant crystal structure and the characterizations of several DnrK variants, the insertion of a single amino acid in DnrK (S297) is sufficient for gaining a hydroxylation function, which is likely caused by carbanion stabilization through active site solvent restriction.

Despite large differences in the three-dimensional structures of the oxygenases and the potential for multiple oxygen activation mechanisms, all the enzymes in my studies rely on carbanion intermediates to activate oxygen from either flavins or their substrates. This thesis provides interesting examples of divergent evolution and the prevalence of carbanion intermediates within polyketide biosynthesis. This mechanism appears to be recurrent in aromatic polyketide biosynthesis and may reflect the acidic nature of these compounds, propensity towards hydrogen bonding and their ability to delocalize π-electrons.