Evaluation of the GPS Accuracy of Tablets

Evaluation of the GPS Accuracy of Tablets 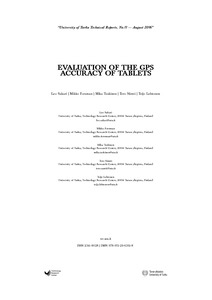 Augmented Reality (AR) applications often require knowledge of the user’s position in some global coordinate system in order to draw the augmented content to its correct position on the screen. The most common method for coarse positioning is the Global Positioning System (GPS). One of the advantages of GPS is that GPS receivers can be found in almost every modern mobile device.

This research was conducted in order to determine the accuracies of diﬀerent GPS receivers. The tests included seven consumer-grade tablets, three external GPS modules and one professional-grade GPS receiver. All of the devices were tested with both static and mobile measurements. It was concluded that even the cheaper external GPS receivers were notably more accurate than the GPS receivers of the tested tablets. The absolute accuracy of the tablets is diﬃcult to determine from the test results, since the results vary by a large margin between diﬀerent measurements. The accuracy of the tested tablets in static measurements were between 0.30 meters and 13.75 meters.