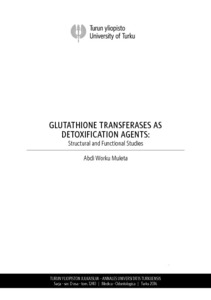 Glutathione transferases (GSTs) are a diverse family of enzymes that catalyze the glutathione-dependent detoxification of toxic compounds. GSTs are responsible for the conjugation of the tripeptide glutathione (GSH) to a wide range of electrophilic substrates. These include industrial pollutants, drugs, genotoxic carcinogen metabolites, antibiotics, insecticides and herbicides. In light of applications in biomedicine and biotechnology as cellular detoxification agents, detailed structural and functional studies of GSTs are required.

Plant tau class GSTs play crucial catalytic and non-catalytic roles in cellular xenobiotic detoxification process in agronomically important crops. The abundant existence of GSTs in Glycine max and their ability to provide resistance to abiotic and biotic stresses such as herbicide tolerance is of great interest in agriculture because they provide effective and suitable tools for selective weed control. Structural and catalytic studies on tau class GST isoenzymes from Glycine max (GmGSTU10-10, GmGSTU chimeric clone 14 (Sh14), and GmGSTU2-2) were performed. Crystal structures of GmGSTU10-10 in complex with glutathione sulfenic acid (GSOH) and Sh14 in complex with S-(p-nitrobenzyl)-glutathione (Nb-GSH) were determined by molecular replacement at 1.6 Å and 1.75 Å, respectively. Major structural variations that affect substrate recognition and catalytic mechanism were revealed in the upper part of helix H4 and helix H9 of GmGSTU10-10. Structural analysis of Sh14 showed that the Trp114Cys point mutation is responsible for the enhanced catalytic activity of the enzyme. Furthermore, two salt bridges that trigger an allosteric effect between the H-sites were identified at the dimer interface between Glu66 and Lys104.

The 3D structure of GmGSTU2-2 was predicted using homology modeling. Structural and phylogenetic analysis suggested GmGSTU2-2 shares residues that are crucial for the catalytic activity of other tau class GSTs–Phe10, Trp11, Ser13, Arg20, Tyr30, Leu37, Lys40, Lys53, Ile54, Glu66 and Ser67. This indicates that the catalytic and ligand binding site in GmGSTU2-2 are well-conserved. Nevertheless, at the ligandin binding site a significant variation was observed. Tyr32 is replaced by Ser32 in GmGSTU2-2 and thismay affect the ligand recognition and binding properties of GmGSTU2-2. Moreover, docking studies revealed important amino acid residues in the hydrophobic binding site that can affect the substrate specificity of the enzyme. Phe10, Pro12, Phe15, Leu37, Phe107, Trp114, Trp163, Phe208, Ile212, and Phe216 could form the hydrophobic ligand binding site and bind fluorodifen. Additionally, side chains of Arg111 and Lys215 could stabilize the binding through hydrogen bonds with the –NO2 groups of fluorodifen.

GST gene family from the pathogenic soil bacterium Agrobacterium tumefaciens C58 was characterized and eight GST-like proteins in A. tumefaciens (AtuGSTs) were identified. Phylogenetic analysis revealed that four members of AtuGSTs belong to a previously recognized bacterial beta GST class and one member to theta class. Nevertheless, three AtuGSTs do not belong to any previously known GST classes. The 3D structures of AtuGSTs were predicted using homology modeling. Comparative structural and sequence analysis of the AtuGSTs showed local sequence and structural characteristics between different GST isoenzymes and classes. Interactions at the G-site are conserved, however, significant variations were seen at the active site and the H5b helix at the C-terminal domain. H5b contributes to the formation of the hydrophobic ligand binding site and is responsible for recognition of the electrophilic moiety of the xenobiotic. It is noted that the position of H5b varies among models, thus providing different specificities. Moreover, AtuGSTs appear to form functional dimers through diverse modes. AtuGST1, AtuGST3, AtuGST4 and AtuGST8 use hydrophobic ‘lock–and–key’-like motifs whereas the dimer interface of AtuGST2, AtuGST5, AtuGST6 and AtuGST7 is dominated by polar interactions. These results suggested that AtuGSTs could be involved in a broad range of biological functions including stress tolerance and detoxification of toxic compounds.