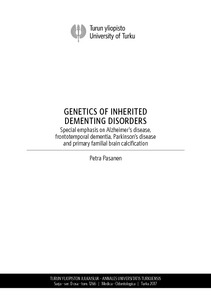 Advances in genotyping and sequencing technologies have enabled the identification of common and rare genetic variation associated with dementia. This thesis aimed to examine the genetic background of inherited dementing diseases in the Finnish population. Sixty families with several individuals affected by dementia were included in the first study. Twelve of these families were found to carry C9orf72 expansions. Exome sequencing was performed in 10 families with Alzheimer’s disease (AD) and two families with frontotemporal dementia (FTD). A few potentially deleterious rare variants were identified, but further studies are needed to clarify their putative role in neurodegeneration. In the second study, a novel α‐synuclein mutation was identified in a family with Parkinson’s disease (PD) and multiple system atrophy (MSA) ‐type disease. The third study showed that this mutation is a rare cause of PD and that, to date, all known families with this mutation originate from a common founder. In the fourth study we described a Finnish family with three patients diagnosed with primary familial brain calcification. Whole–genome sequencing revealed a segregating heterozygous deletion of ~578 kb in size on chromosome 8, supporting SLC20A2 haploinsufficiency as a pathogenetic mechanism.

This study provided new information on the genetics of α‐synucleinopathies and primary familial brain calcification. It also confirmed that C9orf72 expansions are common causes of dementia in Finland. Exome sequencing proved efficient in identifying rare genetic variants, but further studies are warranted to prove their potential association with dementia.