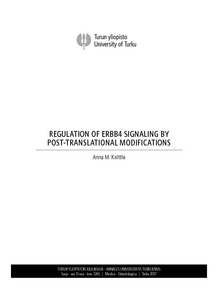 ErbB4 is a member of the epidermal growth receptor family (EGFR/ErbB1, ErbB2, ErbB3, ErbB4) of receptor tyrosine kinases. ErbB receptors are activated by extracellular growth factor ligands, and control the activity of intracellular signaling pathways that regulate fundamental cellular processes such as proliferation, differentiation and survival. ErbB receptors are necessary for the development and homeostasis of several tissues, and aberrant ErbB signaling is a common feature of human pathologies, such as cancer. Accordingly, several regulatory mechanisms are required to ensure the appropriate function of ErbB receptors.

This thesis aimed to characterize novel regulatory mechanisms of ErbB4 signaling, with a focus on ubiquitin and ubiquitin-like post-translational modifications. ErbB4 is expressed as functionally distinct isoforms, and the results of this thesis indicate that ErbB4 is ubiquitinated, endocytosed and degraded in an isoform-specific manner. Ubiquitination, a signal for endocytosis and degradation, was catalyzed by a ubiquitin ligase that specifically interacted with one of the isoforms. This study also demonstrated that ErbB4 intracellular domain (ICD), released by ErbB4 isoforms that undergo regulated intramembrane proteolysis, is modified by small ubiquitin-like modifier (SUMO). SUMOylation promoted the nuclear accumulation of ErbB4 ICD and regulated the nuclear signaling of ErbB4.

Together, these findings represent novel molecular mechanisms that regulate the stability, subcellular localization and activity of ErbB4. Moreover, this study demonstrates for the first time that SUMOylation controls the function of an ICD of a receptor tyrosine kinase in the nucleus. The post-translational regulation of quantitative and qualitative aspects of ErbB4 signaling may have implications for the function of ErbB receptors in both normal tissues and cancer. Finally, the findings of this thesis can potentially be extended to provide new understanding on the mechanisms that regulate the functions of receptor tyrosine kinases other than ErbB4.