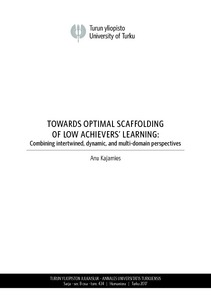 This dissertation aims to contribute to the optimal scaffolding of low achievers’ learning. Scaffolding research has traditionally concentrated on teachers’ short-term support and, thus, has not scrutinized the calibration of long-term support for students’ learning. The aim of this dissertation is to theoretically and empirically deepen our understanding of scaffolding and learning as intertwined, dynamic, and multi-domain processes. Methodologically, the aim is to develop tools to systematically analyze intertwined multi-domain scaffolding and learning dynamics. With these tools, the opportunities created and taken up during interactions by both low achievers and their teachers are scrutinized and integrated to unveil both low achievers’ readiness for challenges and teachers’ flexibility in calibrating scaffolding to students’ needs. On a practical level, by developing and identifying scaffolding practices, this dissertation aims to promote and explore teachers’ professional development in optimal scaffolding. To achieve these aims, this dissertation comprises four intervention studies. The mixed methods approach, including carefully designed tests, quasi-experimental and single-subject designs, and longitudinal in-depth case studies with systematic interaction video-observations, was used in the studies.

In Study I, the aim was to determine the effectiveness of multi-domain scaffolding in supporting low achievers’ learning. We designed an intervention to develop the cognitive–metacognitive and motivational–emotional domains needed in mathematical word problem solving. To overcome challenges reported in earlier studies on scaffolding low achievers’ complex skills, our intervention combined teacher scaffolding with word problems embedded in a computer-supported adventure game. During the instructional discussions, the students were scaffolded to become active, strategic, and motivated problem solvers. Altogether, 429 general education fourth grade 10-year-old students participated. Intervention students (n = 8) and two pairwise-matched controls for each intervention student (n = 16) were selected from the lowachievers in word problem solving among the total sample. Intervention students participated in the intervention in pairs during 14 game lessons. Each lesson lasted approximately 45 minutes. At the group level, some positive and lasting effects for the intervention group’s word problem solving were indicated by the statistical test results and effect sizes from the pre-test, post-test, and follow-up test comparisons. After the intervention, the intervention group’s word problem solving skills no longer differed from those of the other students (n = 405), who served as a comparison group to establish the typical skill level of the age group. By contrast, the control groups’ skills still were below the typical level. When the individual learning dynamics behind the group level were scrutinized, large intra- and inter-individual variability were identified. Observations showed the power of the innovative learning environment in deepening students’ engagement in problem solving, but also the challenges in scaffolding low achievers’ complex skills. It was concluded that low achievers’ word problem solving skills progress when they are given intensive and systematic multi-domain teacher scaffolding in a carefully designed computer-supported learning environment. The interesting variability in the low achievers’ development and the vital role of the instructional discussion between the low achievers and the teacher highlighted the importance of in-depth analysis of multi-domain scaffolding interactions to deepen our understanding of the most optimal ways to scaffold low achievers and formed the basis of Studies II to IV.

In Study II, the aim was to establish the potential of dynamic interaction analysis to study scaffolding. We introduced an educational application of the State Space Grid (SSG) method for analyzing teachers’ scaffolding in relation to students’ learning in real time. We also built a theoretically integrated optimal scaffolding model that uses concepts of interpersonal positioning, creation, and the take-up of opportunities to interpret interactions illustrated with SSGs. Based on the optimal scaffolding model, during scaffolding, students are positioned by moment-to-moment opportunities to participate in particular ways. Over time, these interpersonal positions establish diverse learning trajectories. To successfully support learning in the cognitive–metacognitive domain, scaffolding was supposed to include both dynamic matches between opportunities created by the teacher and taken up by the students and opportunities created by the teacher at a higher level than the students’ following participation. Methodological illustrations were produced by analysing from videotapes the strategic levels of opportunities created and taken up between a special education teacher and three fourth-grade low achievers during three lessons in a multi-domain small-group reading comprehension intervention. The results showed that teacher domination and interaction at low matched levels were very typical. Interactions at high levels were rare. Missed opportunities were observed when the teacher created high-level opportunities, but faced challenges in pulling low achievers to this level or failed to take up opportunities created by the low achievers. These missed opportunities showed that the teacher had difficulties calibrating her level of scaffolding to pull the lowachievers toward new levels of independent activity. With these methodological illustrations, we established the power of SSGs for representing and analyzing instructional match and mismatch in the cognitive–metacognitive domain. We also showed that studying scaffolding interactions has great potential for understanding teachers’ expertise and the dynamics behind resistance and resilience to learning. The methodological and theoretical progress made in Study II formed the basis for scrutinizing long-term scaffolding interactions with more cases in Study III.

In Study III, the aim was to deepen understanding of the intertwined and dynamic nature of evolving scaffolding patterns in the cognitive–metacognitive domain. We further developed the optimal scaffolding model and applications of the SSG method for studying long-term scaffolding. To capture opportunities created and taken up during extended processes, all intervention lessons in two small groups were analyzed from videotapes (19 lessons/group, altogether 21,428 contributions). Both groups participated in the reading comprehension intervention developed in Study II, and interactions were analysed in the same way as in Study II. The results demonstrated that low-level matches were too typical and high-level matches too rare also during long-term scaffolding. Based on the optimal scaffolding model, we expected an increase in high-level matches and a decrease in low-level matches during the intervention. However, there were no linear changes in the matched interactions. The most promising but, unfortunately, frequently missed potential emerged when the teacher or the low achievers created opportunities by participating at a higher level than the other participant. We expected an increase in opportunities created by the teacher during the intervention. However, one of the two teachers did not increase and the other even decreased high-level opportunities. Interestingly, there was a linear increase in the high-level opportunities created by the low achievers in both groups. Unfortunately, the teachers did not flexibly take up the low achievers’ increasing readiness for high-level participation. Interesting group differences, fluctuations and non-linear developments were also found. This study deepened our understanding of the intertwined and dynamic nature of cognitive–metacognitive scaffolding and emphasized the need to continue developing collaborations between researchers and teachers to increase optimal scaffolding. Future research was challenged to understand the scaffolding in both the cognitive–metacognitive and the motivational–emotional domains to deepen the understanding of the systemic formation and maintenance of learning dynamics. In Study IV, we took the next step towards this grand goal by scrutinizing teachers’ emotional scaffolding.

Taken together, the four studies demonstrated that, to progress towards optimal scaffolding of low achievers’ learning, scaffolding needs to be scrutinized not only theoretically, but also empirically by combining intertwined, dynamic, and multi-domain perspectives. Variability of learning dynamics within and between students emphasizes that the careful, on-going calibration of the multi-domain support from the teacher and the learning environment are vital in optimally scaffolding each student’s progress towards learning goals during long-term interventions. New methods developed to systematically analyze and represent educationally meaningful multi-domain interaction patterns revealed several challenges in scaffolding low achievers. Low-level matches were too typical and high-level matches too rare. This highlights a need to strengthen teachers’ skills in scaffolding students’ take-up of high-level opportunities, which are pivotal for their learning of complex cognitive–metacognitive skills. Teachers should also sensitively listen to and flexibly follow up on opportunities created by their students by joining them in interactions directed towards the learning goals. The scaffolding interactions did not gradually move towards high levels even though it was expected to happen during the long-term intervention. The low achieversshowed increasing readiness for high-level participation; however, unfortunately, this was not flexibly taken up by the teachers. Based on the findings of this dissertation, we need to carefully consider how to optimally spend the precious time we can afford for scaffolding low achievers. The scaffolding interactions should focus on or at least gradually move towards focusing on high strategic and meta-strategic levels during long-term processes. To construct optimal cognitive–metacognitive scaffolding backed by consistent positive emotional support, we also need to pay greater attention to emotional support. Otherwise, the limited resources are non-optimally used for supporting low achievers’ learning of complex skills.KOHTI OPPIMISVAIKEUSOPPILAIDEN OPPIMISEN OPTIMAALISTA OHJAUSTA: Yhteenkietoutuneisuuden, dynaamisuuden ja moniulotteisuuden näkökulmia yhdistellen