Effects of Genetic and Environmental Factors on Proanthocyanidins in Sea Buckthorn (Hippophaë rhamnoides) and Flavanol Glycosides in Leaves of Currants (Ribes spp.) 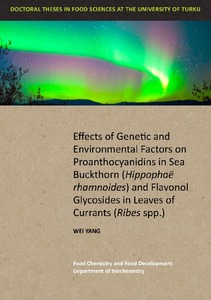 Sea buckthorn (Hippophaë rhamnoides) and currants (Ribes spp.) are rich sources of flavonoids and other polyphenols. Both proanthocyanidins (PAs) in sea buckthorn and flavonol glycosides (FGs) in currant leaves have biological activity and may be effective in maintaining health.

The aim of this thesis was to establish methods for qualitative and quantitative analysis of complex PAs in sea buckthorn berries and FGs in currant leaves, and to investigate the effects of genetic background and growth environment on the content and composition of these compounds. A rapid and sensitive method based on hydrophilic interaction liquid chromatography combined with electrospray ionization mass spectrometry (HILIC-ESI-MS) was established for proﬁling of PAs of sea buckthorn berries. B-type PAs up to degree of polymerization 11 were detected. Among them, the main monomeric units were (epi)gallocatechins. Three PA dimers, four PA trimers and five PA tetramers were quantified by HILIC-ESI-MS in selected ion recording mode (SIR) using reference compound.

Sea buckthorn berries of ssp. rhamnoides (‘Tytti’, ‘Terhi’ and one of wild origin) harvested during 2007–2013 in Finland and of ssp. sinensis (wild) harvested in 2008 in China were investigated by the contents of PAs based on growth environments. In ssp. rhamnoides, the levels of total PAs in the northern samples (high latitude) (610-970 mg/100g DW) were signiﬁcantly higher than that in the southern samples (low latitude) (340-450 mg/100g DW) (p < 0.05). The three varieties (‘Tytti’, ‘Terhi’ and one of wild origin) were all well discriminated by latitude in the PLS-DA model (four factors, R2 0.75, Q2 0.70). Negative correlation was found between total PAs and most of the temperature and radiation-related variables (p < 0.01), and positive correlation with most of precipitation and humidity variables. In the northern ssp.rhamnoides samples, clearly decreasing trends were found in the contents of total PAs during the growth season until harvest (p < 0.01) when length of the growth season (r = -0.805), temperature sum (r = -0.829), and total radiation (r = -0.874) were increasing. No significant correlation was found in southern samples. Within ssp. sinensis, latitude correlated negatively to total PAs and positively to PA oligomers. In comparison to the latitude, altitude showed less impact on PAs.

The leaves of three black currant (Ribes nigrum L.) cultivars, ‘Mortti’, ‘Mikael’ and ‘Jaloste n:o 15’, a green currant (R. nigrum) ‘Vertti’, a red currant (R. rubrum) ‘Red Dutch’ and a white currant (R. rubrum) ‘White Dutch’ were collected at four time points during growth season in southern and northern Finland, 2012. Twenty-seven FGs were identiﬁed in the leaf extracts by HPLC-DAD combined with electrospray ionization tandem mass spectrometry, NMR analysis and reference compounds. Quercetin and kaempferol were the major aglycones of the glycosides. Quercetin-3-O-(2,6-α-dirhamnopyranosyl-β-glucopyranoside), quercetin-3-O-(2-β-xylopyranosyl-6-α-rhamnopyranosyl-β-glucopyranoside), kaempferol-3-O-(3,6-α-dirhamnopyranosyl-β-glucopyranoside) and kaempferol-3-O-β-(6'-malonyl)glucopyranoside were identified by NMR for the first time in currant leaves. The leaves of ‘Mortti’, ‘Jaloste n:o 15’, green currant ‘Vertti’ and red currant ‘Red Dutch’ had similar profiles of FGs, which differed from those of ‘Mikael’ and ‘White Dutch’ had different profiles. During the growth season, the highest contents of FGs in the southern samples occurred a few weeks earlier than in the northern samples. The levels of malonylated FGs decreased regularly during the growth season. Currant leaves collected randomly and from the middle positions had different profiles of FGs.