Essays on social insurance and taxation : Why incentives and institutions matter? 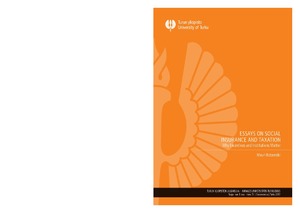 This dissertation starts with an introductory chapter which is followed by four essays.The introductory chapter discusses the theoretical and empirical backgrounds to taxation. There are two general points to this dissertation. First, taxation matters and the design of the tax scheme is to be taken seriously. Second, the point of view of all the papers is of applied science. When applying ealier results to practice, the partial equilibrium framework may not be suﬃcient, and, at least from time to time, a general equilibrium point of view is necessary.

The ﬁrst essay considers the organization of the pension scheme in Finland. The optimal use and function of the pension funds is debated lively in Finland - at least in the popular media. In the ﬁrst essay, a reform is modelled in which the economy moves from the current mixed pension scheme into either a pay-as-you-go scheme or into a fully funded scheme. It is shown that, given a set of simplying assumptions, a gradual switch to a fully funded pension scheme might be a wise choice.

The second essay studies taxation in Finland with the aid of a general equilibrium model. It is shown how the tax revenue curves, the Laﬀer curves, are modiﬁed when a substitute for consumption, home production, is brought into the analysis. It is shown that the Laﬀer curves exhibit diﬀerent form when a substitute for consumption is taken into account and, consequently, policy advices are signiﬁcantly altered.

The third essay discusses incentives to work in Finland between 2011 and 2016. Participation tax rates are calculated and an extensive sensitivity analysis is conducted upon the various assumptions made. Furthermore, utilizing the participation tax rate estimates, an employment eﬀect is calculated on a recent reform where the earned-income tax credit was increased considerably.