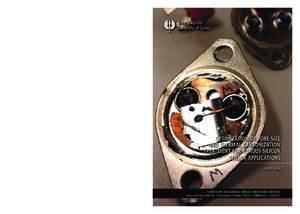 Porous silicon (PSi) is an interesting material and its use in various applications has been studied extensively. One such application is detecting humidity and gas under ambient conditions. Typically, PSi gas sensors are compromised by problems with long term stability and hysteresis. This thesis presents optimization procedures for addressing both of these problems, which are manifestations of both the silicon itself and pores in it.

Typical way of producing porous silicon is to use electrochemical etching to form nanometer size pores in to the material. These pores enlarge the surface area to mass ratio and enables the use it as a sensor material. Increase in surface area also makes the material more susceptible to ambient condition, especially to oxygen. Carbonization has been found to be suﬃcient way to avoid oxidation. Moreover, earlier studies have shown that thermally-carbonized porous silicon (TCPSi) can be used eﬃciently as a capacitive humidity sensor.

Annealing PSi in an inert gas environment to enlarge pores was found to be an eﬀective way of diminishing hysteresis. However, this also reduced the surface area of the pores, which in turn had a negative impact on sensitivity. Even with this reduced sensitivity the sensors showed a correspondingly faster response and exiguous hysteresis. Based on the studies on the reduction in hysteresisis, it was concluded that a hydrophilic surface and annealing are the best choices for TCPSi humidity sensors. These sensors were also tested for long-term stability. Although sensitivity decreased during storage under ambient conditions, the overall performance of the sensors remained satisfactory.

To solve problem arising from decreased sensitivity, electrical insulation between the sensing layer and the substrate was proposed. As TCPSi is resistant against hydrogen ﬂuoride (HF), a new porous layer can be formed underneath the previously formed TCPSi sensing layer. Several possibilities for passivation methods applicable for this porous layer exist. But for capacitive sensing, oxidation is the rational choice, because the oxidized layer will form an electrical insulation between the TCPSi sensing layer and the silicon substrate, so that the current cannot bypass via the substrate at all. Three diﬀerent oxidation methods and their eﬀect on the silicon substrate as a whole were studied. Electrochemical oxidation was found to be the most suitable method for insulation. This insulation increased the sensitivity of the sensors by more than ﬁve times compared to the original sensors.

In addition, a new carbonization procedure was introduced in the studies presented in this thesis. In this carbonization procedure two successive thermal treatments were used to obtain a more reproducible surface termination. Taking into account both the adjustment of the pore size distribution and the new surface treatments, the study shows better reliability of the TCPSi sensor in terms of negligible hysteresis without compromised sensitivity, as well as good long-term stability of the sensor.