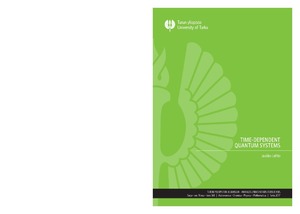 This thesis discusses different aspects of time-dependent two-level quantum systems and their coherent dynamics. In the introductory chapters, we present some basic models used to study them and some basic results related to the level-crossing problems generally.

As these systems are only rarely analytically solvable, some emphasis is put on the existing approximative theories. In particular, the generalization of the method of Dykhne, Davis and Pechukas (DDP), originally developed for problems in near-adiabatic region, is studied further. In the DDP theory, the final populations of different states are determined by the complex zero points of the eigenenergies. Superparabolic level-crossing models are introduced in this thesis and they prove to be simple but versatile test models for these studies. It is shown that, by considering all of the zero points, one can obtain accurate approximations also for highly non-adiabatic regions.

In Chapter 4, a general differential geometric framework for time-dependent level-crossing models is developed and its basic character is discussed. A natural way of associating a plane curve to a time-dependent two-level model is introduced. This association allows one to use all of the mathematical results concerning plane curves to study these models. As an example, we use the Four-vertex theorem to discuss the adiabatic limit of certain type of systems.

We also consider the prospect of enhancing the population transfer by transforming the time-dependent coupling pulse into a zero-area coupling. This is done either smoothly or by an abrupt jump in the phase of the coupling. It has been shown earlier, that one can obtain a complete population inversion (CPI) in a robust way with strong, non-resonant zero-area pulses. We study this in the more general time-dependent setting in Chapter 5, where also the energy levels are driven in a time-dependent fashion. This allows to transport the CPI phenomenon from the strong coupling region towards more moderate couplings. As an example of the smooth case, we consider the SechTanh-model, and show that even the nearest-zero DDP approximation can be used, despite the highly non-adiabatic origin of the phenomenon. We develop an approximative scheme also for the phase-jump case, using the parabolic model as an example. As a limiting case, we derive an approximative formula for the transition probability, which has some universal character and which proves to be useful in the most interesting case where the robust CPI is obtained. It is shown that even the highly suppressed transitions in tunnelling cases can be strongly enhanced in the phase-jump scenario.